The Ascendant or Moon sign best characterizes some people. Others are better represented by a combination of planetary influences so this typology should not be applied rigidly.The strongest planet in the birth-chart usually determines the planetary type. This is usually the lord of the Ascendant, Moon or Sun or the planet that most strongly aspects or influences them.Planets in Mahapurusha Yogas often determine the planetary type.

The planet nearest the mid-heaven can gain such strength, as does the planet closest to its point of exaltation. The planet that is Atmakaraka in the Jaimini system (possessing the highest longitude or highest number of degrees in any particular sign) often represents the planetary type. The dominant planet usually determines the career, temperament and often the physical type.

One planetary type is not necessarily better than any other is. Higher and lower types exist for each planet. These depend upon the ability of the person to bring in the spiritual energy of the planet. 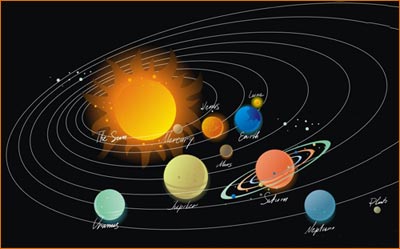 Even spiritually evolved people have their planetary types. An example is the sage Ramana Maharshi who said to be an incarnation of Skanda, the deity of the planet Mars but according to its spiritual energy of knowledge, inquiry and self-discipline.

Planetary types are often evident just by looking at a person. Solar types radiate light and warmth. Lunar types are maternal and receptive. Generally in Vedic Astrology we identify people by their ruling or most powerful planet, not so much by their sign as in Western Astrology.

• Find Sunrise/Sunset for any Date