Shadbala is an elaborate system of computations to aid in determining planetary strengths and weaknesses. It is perhaps the most sophisticated and detailed of all such astrological systems and most likely the most reliable. It requires much astronomical knowledge to compute accurately. While Shadbala is not necessary to give an accurate astrological reading, it is extremely helpful information to have.

As the calculations are very complex and would require much skill and time to do one's-self, various computer programs are preferable.Once computed, all the different types of Shadbala are averaged out to determine the general planetary strength or weakness. Generally, it is considered that if a planet has a Shadbala of 1.0 or more it has the power to give the effects of its position in the chart. If its Shadbala is less than 1, it is considered weak and may cause difficulty. Shadbalas occur commonly up to 1.3 and uncommonly as high as 1.8. They occur commonly as low as .8 and uncommonly as low as .6. They average around 1.1 or 1.2.

Some astrologers, however, consider only the Rupa total on the Shadbala. In this way, they like to discover what is the strongest and what is the weakest planet in the chart in terms of Shadbala prior to any special divisions of the amount.
Other astrologers look more at the particular factors in Shadbala, like exaltation strength (uccha bala) and are not so concerned about the total figures for the planet. 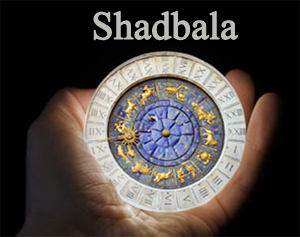 Shadbala is not absolute. If a planet has a high Shadbala, it does not necessarily mean it will always give good results or if it has a low one, it does not mean that it will give bad results. Other factors have to be taken into consideration . Similarly, if a planet has only average Shadbala but is strong in the chart in terms of position and aspect, it can still act in a very potent manner. Shadbala shows the basic strength and weakness of planets but we have to look back to the chart for what they are empowered to do.

Shadbala does not appear to adequately consider planetary aspects. It does read aspectual strength into its factors but this does not count for much. It seldom makes a difference of more than 5%. My experience has been that aspects are probably more important than any Shadbala factors.

Shadbala factors sometimes cancel each other out. While its calculations are each useful to consider in themselves, it is not always useful to average them all out. Astrology requires qualitative judgments and these cannot always be reduced to mere quantitative calculations. There is still no substitute for insight and experience.

While all the factors of Shadbala are important and should be considered to some degree (like whether a planet is strong by location, position or aspect), the present system of Shadbala for doing this may not be entirely accurate. Shadbala needs to be researched and revamped into a more workable system.

The six factors of Shadbala are: