The qualities of Ashwini Nakshatra:This Nakshatra is ruled by Ashwin twins, suns of Surya (Sun), mystical doctors. This nakshatra brings their healing energy down to the earth. They bring light,happiness and bliss to everyone they touch. Ashwins has the power to quickly heal and reach things (shidhra vyapani shakti).

The Ashwins can be invoked to bring about healing and rejuvenation of the body, mind and spirit. Ashwins are forces of prana, which is quick in its action to stimulate, help and initiate a new level of healing. Ashwini is a head of sacrificed horse, symbolic of the sun, which here initiates its journey into the higher worlds. It starts the mystic year, which symbolizes the unfoldment of the Purusha. Ashwins shows the work and sacrifice necessary to undertake new ventures. 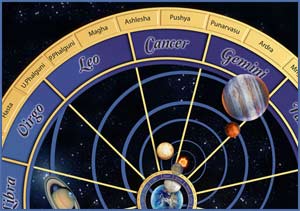 Ketu, the planet of doubt, negativity, knowledge and critical mind, rules this Nakshatra. Ketu casts its shadow on Mars, ruler of Aries, it gives lesson of doubt of martial and vital impulses and passions, which are quite strong at this point. Ashwini is a place of exaltation of Sun; the issue of identity comes up here. This Nakshatra is regarded as of vaishya varna, nature, – deva, animal symbol, – horse, gunas (on 3 levels), – rajas/rajas/rajas. It has a male quality and has dharma as a primary goal of life. It corresponds to a South direction. "Taittiriya Brahmana" describes the fruits of worship as "One who makes appropriate offerings to Ashwins and to Ashwini becomes possessed of good hearing and will not become deaf".

The qualities of Purva Phalguni:

Bhaga, the blissful form of Sun, deity of good fortune and prosperity rules this Nakshatra. Bhaga gives charm, charisma and ability to influence others, to draw them around us as a source of happiness and light. Purva Phalguni shows gravity towards the source of delight. Extrovert type of characters may become materialists, but introverts may become spiritual seekers. Shiva Lingam is one of the symbols of this powerful and creative Nakshatra (another two are swinging hammock and two front legs of bed). Purva Phalguni gives the power of creative procreation on all levels (prajanan shakti) and wealth in general. Venus, the planetary signification of beauty and delight, rules this Nakshatra. It gives power of inspiration, social recognition and prestige. This Nakshatra is regarded as of brahmana varna, nature, – manushya (human), animal symbol, – rat, gunas (on 3 levels), – tamas/rajas/tamas. It has a feminine quality and has Kama as a primary goal of life. It corresponds to a North direction. "Taittiriya Brahmana" describes the fruits of worship as "One who makes appropriate offerings to Bhaga, to the Phalgunis, gains the best portion among his peers".

The qualities of Mula:

Nirriti, the Goddess of calamity, falsehood, death and destruction, who lives in the kingdom of dead, rules this Nakshatra. She represents void but also a foundation. Nirriti has the power to ruin, destroy and break apart (barhana shakti). She is also called Alakshmi (denial of Lakshmi, devi of prosperity) and also depicted as a Kali with necklaces of sculls, representing the heads of ignorance. Mula means "the root". This Nakshatra's symbol is "tied bunch of roots" and the tail of lion (or scorpion). Mula is a Nakshatra of judgment, danger and transition, but on the highest level it relates to nirvana. It takes us to the prime roots of things and makes us examine them. Mula can make us profoundly perceptive or self-righteous depending on direction of this energy of negation. Ketu rules Mula and there is danger of coming under its negative influences, which can make person arrogant, but it arises from deep–seated doubt and insecurity. On other hand Mula provides deep powers of perception and capacity to go beyond things, even negate the world. Mula Nakshatra is a tikshna (sharp or dreadful), which can be related to a black magic, spells, exorcism and punishment. This Nakshatra is regarded as of butcher kasta, nature, – rakshasa (demonic), animal symbol, – dog, gunas (on 3 levels), – sattwa/rajas/rajas. It has a masculine quality and has Kama as a primary goal of life. It corresponds to a West direction (at some tantric traditions Nirriti's direction is South-West). "Taittiriya Brahmana" describes the fruits of worship as "One who makes appropriate offerings to Prajapati, to Mula, gains the root of progeny".

Shatabhishak literally means "hundred healers". It bestows gifts in the healing arts and it has power of healing (bheshaja shakti). Shatabhishak is also known as a "hundred stars", which reflects the royal quality of this Nakshatra. It is said, that is a fortunate star of the king. Shatabhishak people can possess tremendous vital force and courage that will defeat their enemies. The blossom of inner potential and the full arousal of the life force of kundalini can be achieved here. The deity ruling this Nakshatra is Varuna, heavenly father, bestowed of wisdom, medicine, cosmic waters and rain. Here the issue of relationship with Divine Father comes up, along with issue of guilt and atonement, sin and redemption. It can cause us to feel very fearful or guilty, inferior, rejected and condemned. Or we our self can function as some father of judge of others or the world at large. It is a Nakshatra of catharsis and deliverance. It also relates to karma, judgment and retribution. It puts us into calamity of Devine wrath, as a way to seek divine grace to save us. Those who can't open up to Divine grace under it remains underachiever and underworld figures. It exposes weak core of the ego. It is one of the most ambivalent, the most spiritual and the most worldly Nakshatras. Rahu, lord of Maya, rules Shatabhishak. It is here that we have to face the illusion both within our self and in the world. The Rahu or Maya can become the wisdom power of the great lord Varuna. This Nakshatra is regarded as of butcher kasta, nature, – rakshasa (demon), animal symbol, – horse, gunas (on 3 levels), – sattwa/tamas/sattwa. It has a feminine quality and has Dharma as a primary goal of life. It corresponds to a South direction. "Taittiriya Brahmana" describes the fruits of worship, as "Varuna desired, "May I be firm and not unsteady" One who makes appropriate offerings to Varuna, to Shatabhishak, becomes firm and not unsteady".

the qualities of Krittika:

Krittika literally means "the cutter" and its symbols are a flame, a razor, an ax or other edged weapon. This Nkshatra represents the power to burn (dahana shakti). Agni, the Vedic God of fire, particularly the sacred or ritual fire, spirit hidden in matter, rules it. Inwardly, this Vedic fire stands for the flame of awareness and mindfulness. It indicates fuel, fire, cooking food and purification Pleiades are located in Krittika and mark the feminine forces. It is here Scanda (great divine warrior), ruling deity the planet Mars, is born. Krittika is a womb of the fire god, located mainly in passive field of Taurus. It has capacity to nourish and give birth to the light. Devine Mother as mother of warrior is also figured here as Durga or Uma. Krittika is ruled by Sun. It shows light, creativity and personal growth, particularly as directed toward the material world, either to further manifestation or to bring Devine energy into it. Krittika is also the place of exaltation for the Moon. Here the lunar principal gives birth to the god of fire, the mind 9manas0 gives birth of deeper perception. Lunar qualities of perceptivity and openness work their best here, not for self-denial but to bring forth a higher power. This Nakshatra is regarded as of brahmana varna, nature, – rakshasa (demon), animal symbol, – sheep, gunas (on 3 levels), – rajas/rajas/sattwa. It has a feminine quality and has Kama as a primary goal of life. It corresponds to a North direction. "Taittiriya Brahmana" describes the fruits of worship, as "One who makes appropriate offerings to Agni, to Krittika, becomes an eater of foods for mortals".

One of the main differences in qualities between those two Nakshatras, – ruling luminary. Uttara Phalguni is ruled by Sun and it is more centered on connection with Self (Atman). Self-consciousness gained in Leo becomes directed toward of practical work in the field of Virgo. Hasta, ruled by Moon, makes individual more centered in manas and attention is more directed toward outer material world. Second, very important difference, – different type of energy (shakti) transmitted by those Nakshatras. Bhaga, god of happiness, rules Uttara Phalguni. Its power is giving prosperity (chayani shakti) through marriage or union. Savitar, creative form of Sun god, rules Hasta. Its power is the ability to gain what we are seeking and place it in our own hands. It gives the ability to achieve our goals in complete and immediate manner.