Planets in the eleventh give abundance, the realization of our aims and good income. Malefics like Saturn, Mars and the Sun do particularly well here for financial purposes.Benefics in the ninth give good luck, fortune and favor in legal ventures, particularly Jupiter, but malefics are to be avoided here.

Benefics in the fifth give gain through stocks and speculative ventures, particularly Jupiter. Malefics here also cause harm. Planets in the fourth give property and vehicles. Saturn here is also good for this. Benefics in the second give good income through our own personal work but malefics can cause difficulty. Both Jupiter and Mercury do well here. Planets in the tenth, benefic or malefic, give us the power to influence the public but Saturn here often raises us up only to take us down again. 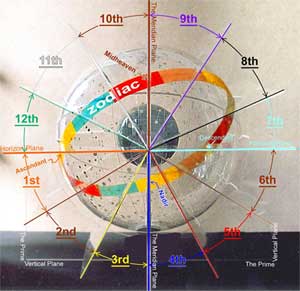 Planets should not be located in houses of loss. Planets in the twelfth will give high expenses. However, if we are engaged in some charitable ventures we may have benefics or well placed planets in the twelfth. We should also note that some people who have both high income and high expenses will have a prominent twelfth house but other strong wealth- giving houses to balance it out. Venus in the twelfth, however, is generally good for wealth. The twelfth as the house of foreign countries can also show material activities in foreign lands, including import/export.

Moon
The Moon in Signs

Aspects to the Moon
Moon as House Lord
Planetary Periods

The Moon in Houses
Other Planets