Rahu shows influences from personal desires and emotions, including the force of collective desires. Ketu shows our individual karma and its patterns. Rahu shows were we are susceptible to collective karma ant its impulses. Ketu shows old karma and Rahu new karma born from desire. Ketu – completion of old karmic debts, Rahu indicate expansion of new karma based on desire, which keeps us in samsara. Rahu-Ketu axis is crucial in understanding personal karma. It indicates houses that require actions for completion old karma (house were Ketu resides) and issues related to house were Rahu resides, which should be worked out during current incarnation. 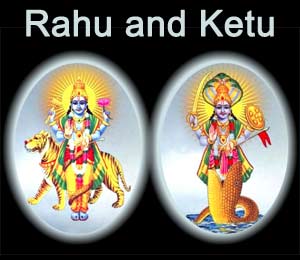 Rahu and Ketu relation to the Sun and the Moon:

Rahu is particularly strong for eclipsing the Moon (significator of manas); Ketu is stronger for eclipsing the Sun (self, ahamkara). Most of Rahu actions – it's causing of mental derangements, hallucinations, possessions by different type of grahas (avesha or unmada by bhutas, yakshas, pishachas, rakshasas and other entities), emotional fluctuations – can be explained by an eclipse of the Moon and the mind. Rahu shows karmic influences on the manas and Ketu on the ahamkara. There is corona of the Sun during solar eclipses. Ketu darkens the primary light of things, but allows their subtle inner light to be seen (astral perception). Rahu grants ability to transcendent mind, Ketu gives opportunity to transcendent ego function.

Rahu calls subconscious darkness. It draws out the karmic latencies from within us, it's heavy, tamasic forces and desires suppressed negativity. It alters our minds and makes us toys in the hands of collective sub consciousness and other entities. Rahu indicates addictions. Beside mental derangements mentioned above it can also give disease. It shows where we lose control of our faculties and are subject to disturbances in the regulatory systems of the body. Rahu means that which hides or obscure, - qualities of Mara (devata which binds us to samsara).

Rahu is a head of serpent and thus gives the wisdom of serpent, which rules over our mental functioning. Rahu can make us aware of these forces in the world and can teach how to use them. Rahu, in its positive manifestation, can show karmic opportunity. It shows harmony with collective trends that can give great worldly power and success. It projects much glamour. Rahu's success can undo us at the end and seldom gives contentment.

Ketu is a serpent's body without head. This explains Ketu as indicating death, destruction, drugs, losing on's head, loss of will suicide. Ketu indicates compulsions. It separates us from people and from ourselves by making us too doubting, lacking in faith, trust and confidence.

Ketu indicates completion of karmic cycle, hence, liberation. Ketu means perception, illumination. The south node is regarded as giving strong perceptive faculties, even of occult or spiritual nature. Ketu is regarded as giving strong imaginative sensitivity, which may also function as spiritual method at tantric sadhana with visualization of ishta-devata's mandala and a like.

Rahu and Ketu in the Kundalini:

Rahu and Ketu represent our serpent force, the Kundalini Shakti, in its functioning under duality of ignorance. To integrate the forces of the two nodes in the chart is to raise the Kundalini. Rahu stands for the base of spine. Ketu stands for the top of head. Rahu shows energy potential in the lower chakras. Ketu indicates the perceptive powers in the higher chakras, ajna-chakra in particular. Rahu shows those factors, which keep us asleep in lower chakras. Ketu shows those, which distort the powers of the higher chakras. Rahu can activate Kundalini but generally in an unwholesome way. Ketu can activate subtle perceptions but there is always the danger that they are used in a personal way, inducing, so called, "ego-trip".