Divisional charts provide detail and specificity in the delineation of planetary influences.

Each divisional chart has specific usage and focuses on particular areas of life. 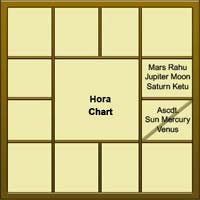 Hora chart is a second divisional chart. It gives solar or lunar status of planets and does not place them is signs like other divisional charts. The first part of odd signs is ruled by Sun, the second half by Moon. The Moon rules the first half of even signs; the second half by the Sun. Solar division planets give more reliance on one's own inner power and give initiative. Lunar division planets give more reliance on social influences, family, the past. The Hora chart is often given influence and relate to wealth.

Masculine planets (Sun, Mars, Jupiter) are stronger in hora of Sun. Planets of feminine nature (Moon, Venus, Saturn) are stronger in the hora of Moon. When a ruler of second house is placed in its appropriate hora, it gives better results for the affairs of the second house. 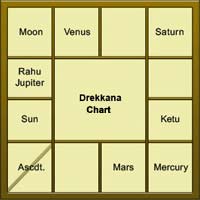 Drekkana chart is a third divisional chart. The first third (ten degrees 00 – 10) of any sign is ruled by sign itself. The middle third (10 – 20) is ruled by subsequent sign of the same element. The last third (20 – 30) is ruled by the final sign of the same element. Drekkana corresponds in meaning to the third house, relating to the brothers, sisters, friends, alliances. It shows our capacity to work in group to achieve a particular goal. It indicates energy, curiosity, courage and prowess. The position of the lord of third house in the birth chart should be examined in the Drekkana, as well as Mars (natural indicator of third house).

The position of the lord of the Drekkana Ascendant should be examined in the birth chart. This is important for determining the affairs of siblings. Drekkana is also useful for fine tuning of sun, moon and Ascendant positions. When native has many planets located in the same sign, then we can discriminate their action by their decanate positions.

The Navamsha or divisional ninth chart:

The Navamsha is a main divisional chart and like the birth chart is examined for all domains of life. Some astrologists consider Rashi chart as a summary of whole potential of karma and Navamsha as a representation of ripened karma for current incarnation. A weak Navamsha but strong rashi chart shows strong potential but difficulties in manifestation. Each sign is divided into nine equal parts of 03 degree and 20 minutes. The first ninth of a sign is governed by cardinal sign of the same element, followed by the rest of signs from it in order through the zodiac. Navamsha shows us the interrelationship between the birth chart and the nakshatras. Each Navamsha sign corresponds to one quarter (03 degree and 20 minutes) of the nakshatra. The Navamsha refers to marriage and to the partner and relationships in general. Comparison of Navamsha charts of couples can give information about their dharmic and spiritual compatibility. Navamsha corresponds in meaning to the ninth house, relating to dharma, spiritual motivation. The positions of Jupiter (significator of ninth house) and the atmakaraka in Navamsha are of particular importance.

Importance of the divisional twelfth chart:

The Dwadashamsha, twelfth divisional chart, is past karma chart. It traditionally indicates parents but stands for past conditioning generally. It can be used as a birth chart of last incarnation. It indicates what soul brings with it into this birth. It shows karmic reason for our particular character and destiny in life.

• How to Judge The Natal Chart