It is important to compare how the planets in one chart affect the houses in the other. This we can see by using the ascendant in one chart for reorienting the houses in the other.Most important are planets that come into the seventh house in the partner's chart or aspect it. Should Venus in the woman's chart come into the seventh for the man's chart, attraction would be increased.

Her Moon in his seventh house is similarly good but its influence is of a general nature.For the woman, it is best if the man's Jupiter comes into her seventh house or at least aspects it. Its aspect on her Moon or the seventh from her Moon is also helpful. 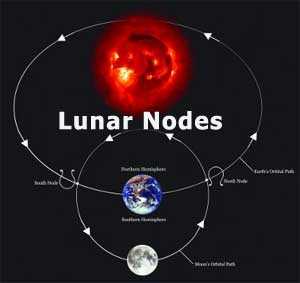 The lunar nodes are strong karmic indicators. We often see a strong connection between them in charts of individuals who are very close. They can indicate past life relationships.

Nodal exchanges in relationship are very profound and show a deep psychic connection. They connect the astral bodies of the people involved. They are not always happy relationships, however. When difficult, they make it very hard for us to extract ourselves from the relationship.

• The three qualities of houses

• Find Sunrise/Sunset for any Date