On the 15th of April 2014 we have a Total Lunar Eclipse. A Lunar Eclipse occurs when the Moon is full and the Earth blocks the Sun's rays from reaching the Moon, thus the Moon is cast within the Earth's shadow. A lunar eclipse is a time to eclipse or move beyond the negative patterns of life. Lunar Eclipses also mean completion of something. 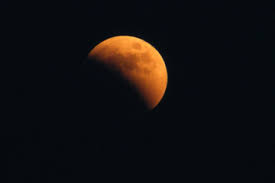 During this lunar eclipse of April 14th, the Full Moon is in the Airy sign of Libra and the Sun is posited in the fiery sign of Aries. The lunar eclipse occurs at 25 degrees and 16 minutes of Libra affecting people born with personal planets at approximately 20 to 30 degrees of the Cardinal signs of Aries, Cancer, Libra, and Capricorn most significantly.

The effect of the Eclipse would be intensified thanks to the Grand cross on April 23/24th, 2014.

A day or two before the lunar eclipse occurs there would be much anxiety involved. For those whose birthdays fall within a month's range this eclipse holds something in store. There would be important changes in their life and it would be for good. However health issues are likely to haunt the natives for quite some time.

As the Eclipse falls in the 7th house of partnership, Libra, there would be goodness in partnership deals around the world. For some there would be an ending of something and the beginning of another thing in life..

Can I trust my friend?

Will my career be successful?

Where shall I settle down in life?