If most of the planets in the chart are located below the horizon:It shows introvert nature of individual. More evolved type will be attracted to meditation. Natives with such chart will be unexpressive or withdraw their feelings or motivations. They can be successful in the outer world but they will work behind the scenes or through other people. 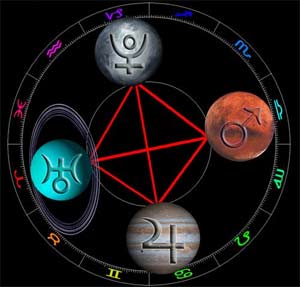 What does it mean if they are located above the horizon: Such position indicates extravert, outgoing, political nature of individual. Native will be communicative, but possibly superficial. More evolved type may express spirituality through work or communication.

most of the planets are in such opposite houses as the first and seventh:

the main houses that govern wealth:

Main houses that govern wealth are second (gain through own effort) and eleventh house of income. Lords of those houses can create combinations for wealth, which are known as a Dhana Yoga.

The second and eleventh houses:

Second house shows gains through our own personal efforts or work we do with our hands or with our speech. Eleventh house gives income through our friends, associations and greater goals of life.

Moon important in any affairs relating to the public:

The Moon represents our capacity to influence people, to have an impact upon society, to reach the masses. It gives popularity and recognition and keeps us in harmony with the trends of the time.

the partner in the birth chart of a woman? Of a man:

Traditionally, from dharmic point of view, Jupiter represents partner (husband) for the women (eastern type). Mars also can be considered as a significator of partner for female but rather as sexual and emotional passion (that is more applicable for the western type of women). For the male relationship potential involves examination position of Venus. Other factors which should be considered for both male and female: seventh house and its lord. Position of Mars and its possible affliction to marriage should be examined (for presence of Kuja Dosha Yoga). As a secondary factor, fifth house (house of romance) and its lord can be examined for western people too.

Certain positions of Mars in houses create difficulties in marriage and relationships, - that effect is named as a Kuja Dosha (blemish of Mars). The relevant houses are first, forth, seventh, eighth and twelfth. Exceptions are for the first house if the sign is Areas, for forth house if it is Scorpio, for the seventh if it is Capricorn or Pisces, for the eight if it is cancer and for the twelfth if it is a Sagittarius. Such placement should not be interpreted simplistically, since many charts have them. They should be reinforced by other negative influences to the sevens house, its lord and marriage significator. Kuja Dosha has many exceptions and four are the most important: 1) generally speaking, anyone who has Kuja Dosha can safely marry anyone else who has Kuja Dosha of approximately equal strength; 2) even the strongest Kuja Dosha is over and done after native reaches age thirty; 3) Mars in its own or exaltation rashi generally greatly modifies any Kuja Dosha; 4) The presence of the Moon in the house Mars occupies also cancels Kuja Dosha.