Characteristics of the Houses

Characteristics of the third house :

Third house's name is bhratri bhava (house of brothers). It also indicates friends, companions, and group of equals. It also a martial house symbolized by the arms. It shows basic energy in life, - impulses, intentions, and desires. It shows main interests in life.

Characteristics of the sixth house:

Sixth house's name is shatru bhava (enemy-house). It relates to enmity, disease, difficulties and obstacles in life. Planets here tend to cause physical disorders according their nature, particularly related to a digestive and immune systems. Influences here are important for showing native's physical constitution, like those to Ascendant. It is house of injury, wounds and accidents. Twelfth house is house of impulse and power, which can be directed against us or may come through us. It shows native's martial powers and that of his enemies, dangers that come from any use of force. This house shows theft or litigation and can cause poverty, it shows place where native should place caution in life. Another sixth houses indications are work, service (capacity for karma-yoga) and discipline, austerity, effort (tapas). Also it is indicator of relationships with foreigners or distant relatives. Key words for this house: accidents, anxieties, debt, diseases, enemies, lawsuits, maternal aunt or uncle, middle abdomen (and organs therein), service (especially routine), theft.

Characteristics of the eleventh house:

Eleventh house's name is labha bhava (gain house). It shows income or that which bring us increase. It relates to goals, aspirations, will and ambition. It measures native's individualistic motivation but on the other hand 11 house indicates realizations of native's ideas and desires. This house is a house of abundance, in which planets are strong and favorable, both malefics and benefics. Whatever planet is located here will tend to posses its qualities in a great measure. It is not only place of abundance but also of excess. On a higher level, this house gives spiritual gains and shows the development of expansive and articulate intelligence. In this sense it resembles fifth house, but its opposite point I chart. If fifth shows natives intelligence, then eleventh shows ability to project inteligence into the world. If fifth relates to writing, the eleventh is publishing. Key words for this house: calves, shins and ankles, desires, easy money, older brother or sister, gains, income from career, thing received, gifts, wealth, wishes. 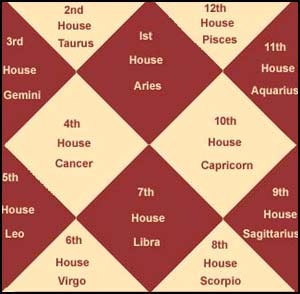 Characteristics of the twelfth house:

Twelfth house's name is vyaya bhava (loss house). Native tend to lose or waste away the traits of planets located here. Depending on planet's strength in this house it can indicate losses, which will be balanced by gains on other level. Strong twelfth house may indicate speculative investments, which are short-term losses, which may result in long-term gains. Well places Jupiter may indicate charity, which gives some benefits on spiritual level. Strong Venus may indicate expenses, which give some bhoga (pleasures). It is house of foreign lands. It also indicates confinement voluntarily (like retreat or ashram) of involuntarily (like hospital or prison). It is house of moksha, completion of past karma, end of lifetime and destination after death. It is en indicator of mini-moksha, - sleep and sleep comforts, sexual pleasures. Poorly placed planets in this house may indicate losses and disorders on material, emotional and mental levels, suffering from ripening of negative past karma. Key words for this house: comforts of the bed (like sleep and sex), convalescence, confinement, end, expenditure (including financial), feet, foreign residency, immigration, loss (including bodily vigor), and moksha.