This is one the best combinations in the zodiac. They make a perfect match for each other. Leo man has an outgoing personality which easily attracts the Aries woman who likes adventure and exploration. Their home would be packed with love and warmth. Both being fiery signs there would be much sparks and jealousy as well here. There would be occasional fights and hitches but ultimately they make up as if nothing had happened. 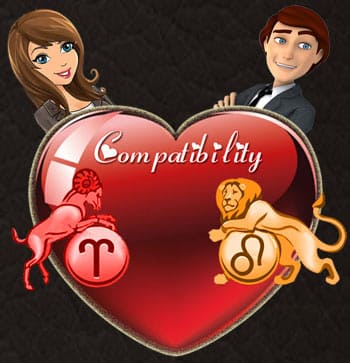 A high degree of compatibility exists in this relationship as far as romance and passion is concerned.

It would consist of love at first sight and true love later on rules this duo. They take love life in their natural stride.

An Aries woman and a Leo man make good friends as they are loyal and honest to the core. Leo's loyalty and Aries honesty go hand in hand to make this comradeship one of the best among the zodiacs. They also have a good time together enjoying outdoor adventurous activities a forte for both.

This is a good combination for marriage as well. The energy levels of both the partners are so high. Even if they fight occasionally ultimately they make up. At least they make up for the sake of relatives and children.

Both the Aries female and the Leo Male are warm, affectionate and sharing enough when it comes to the art of love-making. It is taken more of a sport and much emotions would not be involved. The setting also calls for a major event-changer for the game.

Though this combination is very much compatible enough there would be occasional temporary hitches, break-ups and then make-ups. Both find the other one more exciting that they cannot get out of this relationship in one go. It takes a lot of fist fights and hitches for the relationship to come to a grinding halt.