This is one combination that is made in heaven. The intelligence of the Aries man and the creativity of the Sagittarius woman just complement each other. Together they enjoy adventure and intellectual thoughts. Though occasional rifts cannot be ruled out here, this relationship would have a smooth sailing. Good health and a happy family would be their top priority in life.
Both are bent on relishing the hour at hand and do not care much about the future. 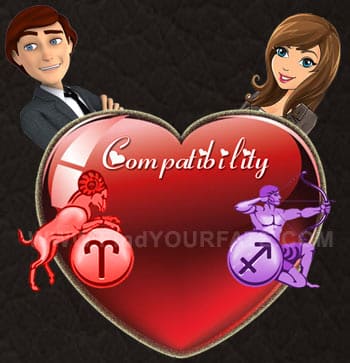 This is one of the combination where much romance and passion are involved.

They give wholly to each other and live a lively togetherness. Romance would be pursued with much commitment here in this duo.

An Aries man and a Sagittarius woman also make good friends for life. Since adventure is in the blood for both there would be no time spent wasted in boredom here. Both would be also found outdoors and on the run always. They have many common interests to set the sails going.

This is a good combination for a compatible married life as well. But the Aries man would not be not too much interested in domestic life while the Sagittarius partner shall take care of the mundane affairs of the household.

Sex would be a compatible act for these two as they take it as a form of sport. It would be always full of life, passion, and there would be no holding back. It would be more of an impulsive act rather than an important ritual for consummation.

There would be not much troubles in the relationship. Both do not hold grudges. They get excited at the sight of the other even after a long break-up. Hence the endgame would not be an end at all.