Vastushastra takes in to account earth's magnetic influence for the entire earth is under this influence. The principles in Vastushastra should be followed strictly so as to give maximum benefit to the flat owners. Sleeping in the wrong direction make our body & mind suffer. Such that cells in human body can affect a persons mood a small change in the vastu of an apartment can bring about varying changes.

Cells in the human body is like an electrical part and has magnetic field which in state the of harmony is fine but any disturbance can cause changes in person's moods & behavior. 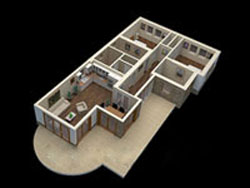 Magnetic energy & its influence are hard to detect, but it is true because moon affects mind. Thus attention should be paid while constructing multistoried apartments and flats.Though east and north facing plots are excellent for such types of construction, it should be noted that it is not possible to apply each and every principle of Vastu Shastra to the construction of apartments and flats. But however it needs to evacuate unwanted matter from the earth and follow common Vaastu principles. However, unless Vastu principles have been followed in its planning, design and construction, it may lead to deleterious results for its occupants, for the builder, or for the Housing Society itself.

The first step in conforming to the principles of Vastu is selection of a suitable plot of land for constructing the apartment followed by positioning of the Escalator, the Water Tank, Park / Gardens, Community Center, and other places of public and private interest like the Club House, etc.Thus greater benefits can be achieved for the inmates to pass their lives peacefully if at least half the principles of Vaastu Shastra are followed in the construction of apartments.

Vaastu error is less in North or East facing house in comparison to the one facing West or South.A North or East-facing flat with windows and balconies in either of these two directions is ideal. The morning sunlight, rich in ultraviolet rays, brings positivity whereas South or West entrance is not recommended for the afternoon infrared rays are harmful to health. Deep maroon, shades of pale yellow or shades of vermillion red are good if the main gate of the flat faces south .The evening sun in a west facing gate can be controlled by suspending faceted glass crystals near the main gate, which refracts the evening light and reduces the harshness and the spectrum of colours transforms the energy around the doorway.

The bad energy can be transformed by placing plenty of green and tall healthy plants on either side of the gate and a pyramid above the main gate. For a main gate facing the north side a metal wind chime of six rods can be suspended over it and can also be painted by off white, pale blue or can be done by light teak. If your main gate faces east or southeast, the principles of Vaastu recommend placing a single decorative urn filled with water and fresh flower petals to the left of the door from inside. Also place fresh flowers and plenty of plants inside and outside the southeast gate.

Escalators or the lift cannot be in the southwest sides, west and south sides, if it is so we must provide a sump or we have to dig one there failing which it will cause vasstu problems. Digs (pits) should not come at southwest, south or west directions but there are remedies like doing some alterations to that flooring, i.e. the pit flooring level should be heighten than the flooring level at Brahmasthan.

The importance of the directions of the North and the South lies in the flow of magnetic waves which flows from North Pole to South Pole so southward portion of every building should be higher than the northward portion. Missing corners can be corrected by having a rectangularor square–shaped site or by recreating the missing corners inside the house with regard to the specific direction and type of energy. Placing a water feature or urn of water with flowers at the northeast sector of the gate will alleviate the ill effect when a portion of the north and east segments are missing.

Placing tulsi plants at the northeast sector of the apartment can transform any bad energy into positive and good energy. Likewise jasmine plants can bring in a flow of good energy with a wisp of its fragrance. The directions of East and West are important as far as obtaining the energy from the sun is concerned.The overhead water tank should be in the west or south-west direction of the building otherwise it may lead to mental tension and burden. Due to water, south-west corner becomes heavy and creates a balance of positive energies in the house and is advantageous. The overhead water tank in the south-west direction should be at least two feet above the uppermost slab and should never touch the slab. The sunrays first fall on this tank and are absorbed in water.

Dampness in the south-west corner is not good so care should be taken that the overhead tank in the south-west corner should not leak; therefore the tank is placed on a slab higher than the slab of the building. When there is a load on the Bramha, life becomes impossible to live so overhead tank should not be in the middle. One does not feel like staying in the house. The overhead water tank should not be plastic as for as possible. If it is a plastic tank it should be of blue or black colour which leads to absorption of sunrays.

Gardens in homes or factories should always be in the North or West and within the confines of the compound. The South–East and South–West are not to be selected for any kind of garden or plantation. Vastu concepts regarding the plants and their plantation must be kept in mind so as to make your home not just superficially beautiful, but also vastu-oriented.Ashoka, Kanakchampa, Ashaphala, Smabhaloo and Coconut planted within the campus in the North and West is good for multi-storied structures and similarly a water pond with lotus in a favourable direction is very good. If a garden is present in the centre of the apartment limit, it must not have any fountain in the centre.

A swimming pool in the centre, towards the South, South–East or South–West and even the North–West created undue events. It brings negativity in the health of the residents. A swimming pool is favourable in the East, North or even in the West. The fountains or water ponds within an apartment limit should not be built in the centre and should follow the same principles as the placement of swimming pools.Placed wrongly they cause problems with respect to mental peace and health. Fountains or ponds are very favorable towards the North–East.

This is also applicable to artificial springs. As per Feng shui, a clump of bamboo signifies good health & longevity for the occupants of the house & is a good condition to the Garden.The width and height of beams and columns is determined by the area and size of the vastu. They are thicker than walls and hence protrude outside acting as an obstacle in the way of energy waves and leads to instability. One should not sleep under the beam as it is very harmful for health. Sitting under the beam leads to unsatisfactory work. Beams can be covered in a false ceiling and thus a flat surface can be created and defects and adverse effects can be avoided.

If a beam is located at an important place within the house, its bad effects can be removed by using three pyramids. If high voltage overhead wires pass over a house, then a plastic pipe filled with lime should be erected from one corner to the other of the affected area in such a manner that it's both ends should remain outside by at least three feet each. This will eliminate the evil effects of energy being generated out of the overhead wire. In certain cases, energy circles can be improved by using Swastika Yantra.

Finally coming to a community hall the stage where rituals are held should be situated in the west so that the couple or the performers of the rituals face east which is auspicious. A dais opposite to the main stage is commended for music performances.

The guests should face west while watching the rituals. It is preferable to have two main doors. One for entry and other for exit. Wash room toilets should be in the North West or south east according to the nature of entrance. As in other buildings, the north and east sections of the building, whether inside or outside should be left free and spacious.

• Find Yamakandam Kalam for any Date

• Characteristics of the Houses in Vedic Astrology