The eclipse of 13th July, 2018 is on a Friday and it is a Partial Solar Eclipse occurring in the zodiac sign of Cancer. The last eclipse in Cancer was in year 2011, hence expect some new energy levels around.

Solar eclipses represent new starts or beginnings. They light our paths ahead and help us to think in a new perspective.

Be prepared to handle some déjà u moments from 2011. Around this Solar eclipse, Mars the fiery planet is going Retrograde, hence though we would be armed with new raw energy, we might not be able to forge ahead without hindrances and delays. 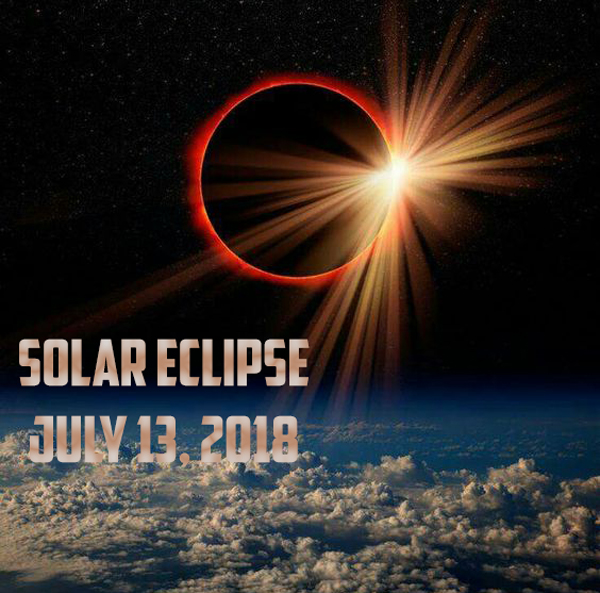 A solar eclipse is just a New moon where the Moon passes between Earth and the Sun. However, a solar eclipse is more powerful because the Moon darkens the Sun. The Solar eclipse of July 2018 is a partial solar eclipse so most of the Sun will still be visible. The new moon represents the end of one cycle and the beginning of a new one. A new moon influence lasts for four weeks in general but a solar eclipse usually lasts for about six months. The next Solar eclipse of 2018 is due on August 11th. During a Solar eclipse, the Sun and the Moon are in conjunction (0 deg). This is a time when we have numerous opportunities around us, and it is up to us to harness the energy around. A time to let go off of old die-hard habits. Good time to make fresh forward actions and initiate deals around positive goals.

Visibility of the Solar Eclipse

The Eclipse is most visible in Northern Antarctica and Southern Victoria and tip of Southern South Australia.

Occurrence of the Eclipse

Astrology behind the Solar Eclipse

The Solar Eclipse of July 13, 2018 occurs in the house of Cancer, a watery sign. This points towards untamed emotional flow. Mother, maternal relations, children and domestic life are the ones that are most likely to be affected with this Solar eclipse.

Major decisions regarding relationships can be made and this is also a good time for new meaningful relationships to start. But there might be hindrances till the effects of the eclipse wane off fully. Especially nurturing and caring energy would be affected. One's inner emotions and feelings can be best brought out to the fore. Finances, and social works are best favored during this Eclipse.

The Solar Eclipse of July 2018 is influenced by a powerful opposition to the minor planet Pluto. This indicates some sort of crisis with your self-esteem, a relationship or an event. There is the potential for neurotic distress or anxiety triggered by a deeply buried subconscious fear.

The July 2018 Solar Eclipse also signals the right time to transform something in your life that is holding you back from happiness and success. A fortunate Grand Trine configuration is found around this time and this allows you to apply this transformation to your love life, finances or creative work. Hard work and determination will unleash the potential in you and avert any personal or inter-personal crisis for now.