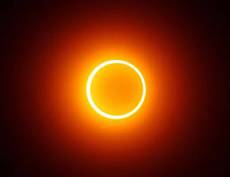 This partial eclipse of the Sun will be visible in South India, Australia, Antarctica.

The eclipse occurs at 8 deg 52 min taurus in the zodiac sky. Hence Taurus and Scorpio natives would be widely affected by this eclipse. A solar eclipse indicates a new beginning, an initiation or a starting point of something important in your life.

The next solar eclipse is due on October 23, 2014 and would be partial. It would be visible in Northern Pacific region and North America.

Solar and Lunar Eclipses occur when the Earth, Sun, and Moon align at the Moon's nodal axis, about four times a year.

Eclipses usually come in pairs in the form of a New Moon (Solar Eclipse) and a Full Moon (Lunar Eclipse). They are very powerful New and Full Moons.

Eclipses repeat themselves every 19 years. During an eclipse we feel that we are in the dark groping around for support and strength. During eclipses we feel being thrown out of balance. But this is a time to look at life from a totally different perspective. Be open and try to garner any information that comes your way. .