All the five bright planets nearer to the earth namely Mercury, Venus, Mars, Jupiter and Saturn will appear together in the morning sky from January 20 to February 20, 2016 and would be visible to the naked eye. That hasn't happened since 2005.

The last time that all the five visible planets appeared in the same sky together was from December 15, 2004,
to January 15, 2005 which was about a decade ago. Though the same lineup would be visible from August 13 to 19, 2016 in the Southern Hemisphere, those in the northern latitudes would find it a little difficult to locate the lineup. Later on this phenomenon can be spotted in the sky only in October 2018. 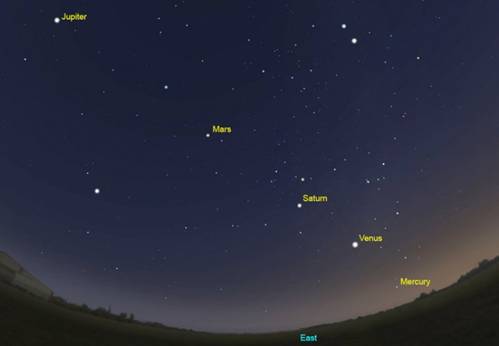 The best time to view these celestial objects in order, all at once, is just before dawn at around 06.50 ET (12.50 noon GMT). No telescope or other focusing gadgets would be needed. From the horizon up, the planets seen along the line will be Mercury, Venus, Saturn, Mars and Jupiter.

Experts in the field of astronomy say that Venus and Jupiter would be the easiest to spot, and although Mars should be a little difficult to sight, would have a distinctive red glow that makes it to stand out. The most difficult planet to spot would be Mercury, as it will appear very near the horizon. All these planets have a different yearly cycle and hence to see them all together in the sky is a quirk according to astronomers.

The Moon will travel past each one of the planets in turn, beginning with Jupiter on January 28 and ending with Mercury on February 7. It will pass by Mars on February 1 and 2, Saturn on February 4 and Venus on February 6.

So what are the astrological implications of this great celestial show??

• Mercury in the lineup would be in its retrograde motion till January 25th. As it turns direct you are out of the conundrum or the retrograde myth and can take a day off for a short visit or picnic.

• Next in the lineup is Venus. It advises us to go creative or artistic. Go on paint a selfie, or take a piano class, compose your very own jingle, indulge!!

• Then it is Mars, the planet of aggression and energy. Its visibility in the morning sky calls for you to take up an energy-loaded work-out. Just sweat it out pal!!

• Jupiter, next in line rules over wealth and prosperity. But it being retrograde in the alignment calls you to be cautious with your financial moves. Save some for the rainy day guys...

• Saturn, the final planet in the line-up teaches you a lot of things about life. Now it asks you to clean-up the mess that you have created in your personal and professional life.