The transit of Mercury in 2016 occurs on May 9th, a Monday. This is a rare astronomical phenomenon in the sense that it occurs once in 13 years only. The last transit occurred in year 2006 and the next transit can be viewed on November 11, 2019 only.

The transit of Mercury occurs when it comes in between the Earth and the Sun.

This is a rare spectacular astronomical and celestial event for amateurs and professionals in astronomy and astrology. Mercury can be seen as a tiny dot seen crossing the Sun when viewed from the earth, looks like a small pimple on the face of the Sun!!. Only the transits of Mercury and Venus can be seen from the earth as they are the nearest planets to the earth. 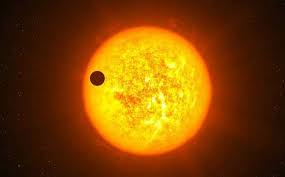 The transit of Mercury occurs when it comes between the Earth and Sun also it should cross the orbital plane of the earth which is ecliptic. The transit starts at around 16h.42m (Indian Standard Time) or 11:12 (UT or GMT) and lasts for about 5 to 7 hours. But the end of the transit would not be visible as the Sun would be setting at that time. The transit can be viewed all over India. The entire transit is visible all over eastern North America, most of South America, western Europe, and the west coast of Africa. Parts of the transit are visible from western North America, southern South America, all of Africa and most of Asia. The only places where this transit of Mercury is not visible is eastern Asia, Japan, Indonesia, and Australasia.

Generally the transit of Mercury in a year occurs once during May and then during November. The May transits of Mercury occur once in every 13 or 33 or 46 years while the November Mercury transits occur every 7, 13 or 33 years. Transits of Mercury can only occur when the planet is close to its ascending node or descending node heading Northwards or Southwards, respectively. For such an event to take place, the planet must be close to inferior conjunction i.e. positioned directly between the Earth and the Sun and also be positioned within 2� of one of these nodes.

The transit of Mercury should not be viewed by the naked eyes as the Sun is involved. Binoculars or telescopes are to be used for this purpose, where the projected image can be viewed on a screen and not directly. Also special eclipse filter glasses can be used.

Effects of the transit

Mercury rules over all sorts of communications, economics and finances. It is said that the transit of Mercury would affect world economies globally. Be noted that the previous Mercury transits made severe impacts on World Economic trends, including many economy downfalls and share market crashes. Also communications may go haywire, not to mention inter-personal communications that usually have a heavy toll on personal love affairs.

Though the transit is a single event on a single day, it would have ramifications and effects that would be felt till around 2017.