The third Mercury retrograde of the year takes place between 3rd and 23rd December 2017 in the house of Sagittarius. Being the last retrograde for the year, it has its effect on the 12 twelve zodiac signs. And here are the effects. 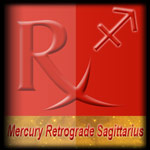 This is the last Mercury retrograde phase for the year and it occurs in your 9th house of fiery Sagittarius for Aries guys. The 9th house rules over learning and overseas travels. Make sure that you have the correct travel plans, else delays are likely. There would be hindrances for your academic pursuits or results.

Correspondences from far off might get delayed this period. Legal matters and sales related areas are most likely to be affected for Aries people. This effect would linger on till December 23rd when Mercury goes direct.

The last Mercury retrograde of 2017 occurs on the 3rd of December in the 8th house of Sagittarius for Taurus guys. The 8th house rules over death and financial spending. Issues related to loans, cards and debts might get delayed or get escalated, beware. There might be a lull in financial inflow for the period.

Double-check all your financial moves when Mercury is retrograde. Things would start to look up only around the start of January 2018, when the shadow period of Mercury retrograde ends.

This would be the last mercury retrograde phase of the year 2017 and it occurs in the 7th house of Sagittarius for Geminis. Negotiations, partnerships, love and marriage likely to suffer a lot as Mercury goes retro. Take time and make decisions only after Mercury goes direct. Discuss the intricacies of contracts and look into the finer print before venturing out. Lay low when it comes to relationship issues. Things turn out better once Mercury gets into direct motion around the end of December 2017.

The last mercury retrograde motion of year 2017 occurs in the 6th house of Sagittarius for Cancer natives on the 3rd of December. Mercury would also be in conjunct with Saturn for the first week of December 2017. This would affect your concentration and you might be bogged down by details. Work demands burden you and communications are likely to be lost thanks to Mercury retrograde. Heath diagnosis and treatments might get postponed to a later date. Wait for Mercury to turn direct till the end of December, when health and career issues can be sorted out for the better.

Mercury would be retrograde for the third time in 2017 on December 3rd and this happens in the 5th house of Sagittarius for Leo people. The 5th house stands for love and speculation and all these likely to be impacted by the same. Love issues haunt you, children might bother you and your creative pursuits would be hindered this time. Fun and joy would be affected as Mercury goes retrograde this time. Some disappointments on the cards around the middle of December. Then things slowly start to look up as Mercury comes out of its shadow period around the first week of January 2018.

The last of the Mercury retrograde motion for the year 2017 takes place on 3rd December in the house of Sagittarius, which is the 4th house for Virgo people. The 4th house rules over family, mother and property deals. Saturn in conjunct with this retrograde Mercury brings about rifts in the relationship with elders in the family, particularly maternal relations. Also real estate deals and house renovations might meet with delays and hindrances. Goodness can be expected in these areas when Mercury goes direct around the end of December, 2017.

The last phase of Mercury retrograde happens in the 3rd house of Sagittarius for Libra natives on the 3rd of December 2017. As this Mercury in retrograde is conjunct with Saturn there would be issues related to your work and academics. Communications get lost and almost everything around you seems to go wrong. Ties with siblings might get a beating. Then around Christmas, when Mercury goes direct things would fall in place for the better. However total relief from the Mercury retrograde can be felt around January first week only when the post shadow period of Mercury retrograde ends.

The last part of the Mercury retrograde for year 2017 occurs on December 3rd, in the 2nd house for Scorpio natives in its neighboring house of Sagittarius. The 2nd house rules over one's finances. Finances might take a beating as the Mercury in retrograde movement is in conjunct with Saturn for the first week of December. Income flow would be hindered a lot and the outflow would be quite heavy. Live within your means, if not frugal for the time period. Though Venus posited in the 2nd house of finances would help you a bit, it is better to avoid unwanted expenditure for the period. Then in January first week, your financial budget would get satisfactory as Mercury gets out the shadow period of its retrograde motion.

For Sagittarius natives, the Mercury retrograde of December 2017 occurs in their first house also called the Ascendant. For the first week of December, as the retrograde Mercury would be in conjunct with Saturn there would be worries, anxieties and unhappiness in life. You ought to be quite serious with life this time. Much concentration is asked for now. There would be relationship issues and partnership hitches. But then Venus transiting your Ascendant house would ease out some situations before they flare up. Goodness can be expected in life once Mercury goes direct around the end of December.

Mercury retrograde in December 3rd, 2017 happens in the 12th house for Capricorn guys in the zodiac house of Sagittarius. The 12th house rules over our subconscious state and secret sorrows in life. Retrograde Mercury in conjunct with Saturn for the first week of December would bring about some privacy concerns in your life. Some of your long-held secrets might come to the fore, there might be health issues for partner or friend, medical expenditure bothers you. However at this time, the Sun and Venus would be travelling through your 12th house and they would give you an inner strength to combat life issues with grit and determination. Things shall start to look up around the start of the year 2018, when Mercury comes out of its shadow period of the retrograde motion.

For Aquarius people, the last Mercury retrograde phase of year 2017 occurs on December 3rd, in their 11th house of Sagittarius. The 11th house rules over our friends, gains and hopes in life. During the first week of December, there would be some dampness in your life as Saturn is in conjunction with the retrograde Mercury. You would suffer relationship issues, your ambitions might get stalled and there might be friendship rifts. You would be too picky to start quarrels with others around. Disappointing news might come from far off. However things would soon find their respective places as Mercury comes out of its retrograde motion on the 22nd of December, well enough for you to celebrate Christmas in peace.

The last Mercury retrograde phase of Mercury for year 2017 takes place in the house of Sagittarius which happens to to be the 10th house for Pisces guys. The 10th house rules over one’s business or profession. As Saturn is conjunct with Mercury this period, there might be troubles in relationship with authorities and peers in the work field. You would not be able to get your point across that easily. Travels and contractual issues meet with impediments. Major decisions regarding relocation or career change would have to wait for Mercury to go direct around the end of December 2017. Expect goodness in your professional arena from January 11, 2018 onwards when Mercury comes out of its shadow period.