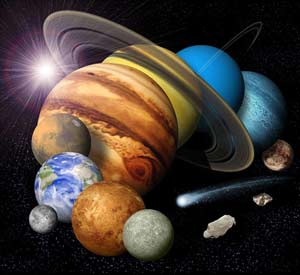 Lords of Trikona houses are always benefics. Malefics, which are lords of Kendra houses, obtain status of temporal benefics. Ruler of Ascendant is always generally auspicious. Planets often rule both benefic and malefic houses, which make their influence mixed. The house, which is stronger or more important determines overall effects of the planet are primary benefic or malefic. Another important factor is the natural friendship or enmity with lord of Ascendant.

When planet rules both Trikona and Kendra houses it becomes Raja Yoga Karaka (significator of great power). It is a union of Vishnu and Lakshmi, dharma and fortune (ripening of good karma).

The lords of the third, sixth, and eleventh houses generally inauspicious:

Lords of these houses are generally inauspicious, as this are houses of egoism, power, violence and disease.