Vedic astrology judges aspects not according to the exact degree of angle between the planets involved but relative to sign. 180-degree aspect is the main aspect in Jyotish. Planet aspects the sign opposite it.The aspects are from planet via sign they occupy to other sign of zodiac and to whatever may be contained in them. There are general (180 degree) and special aspects. 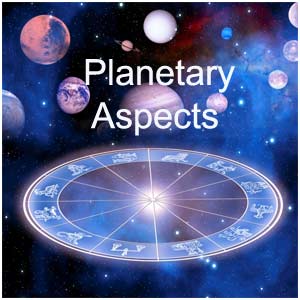 Projection of influence by planets from their given position in the zodiac to certain other points is called planetary aspect or drishti ("sight" in Sanskrit).

The special aspects for Jupiter, Rahu, and Ketu:

The special aspects for Saturn:

Saturn aspects third and tenth constellations from its position.

The special aspects for Mars:

Mars aspects fours and eighth constellations from its position.

Planets in close conjunction with the Sun become "combust". They are weakened and may be rendered powerless. For Mars, Jupiter, Saturn the orb of conjunction for combustion is 8 degrees and 30 minutes, for Moon 15 degrees, Venus 4 degrees and for Mercury 2 degrees.

Hemming in of a planet :

planets which are separative:

The Sun, Saturn, Rahu, Ketu and ruler of the twelfth house from Ascendant are separative planets. Sun burns things up. Saturn creates loss, detachment. Rahu is dispersing in its action and gives attraction to what is foreign or distant. Ketu makes us contract and causes negativity. The ruler of twelfth house creates loss and retreat, which is the nature of that house.