Effects of Other Houses of Relationship:

The seventh is not the only house of relationship. The fifth should be consulted as the house of love, romance and children. We should note the planets here and the aspects to this house and its lord like the seventh. An exchange between the lords of the fifth and the seventh indicates a love marriage.

The twelfth is another house of pleasure. Venus here, for example, often gives a strong sensual orientation. Mars or Venus in any of these houses, particularly if they are signs of Mars and Venus, or if the two planets aspect each other, give a strong sexual nature. 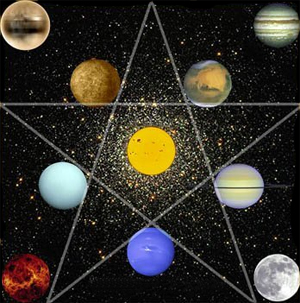 As Jupiter indicates dharma or inner nature, it is important to have a good Jupiter relationship in the charts. For example, if Jupiter in one chart occupies good houses like the first, fifth, seventh and ninth, or if it aspects Jupiter in the other chart.

Aspects between Mars in different charts can cause difficulties and conflict. Most important is Mars in one chart conjunct the Moon in another. Mars conjunct Mars can also be difficult.

A good relationship between Mercuries is helpful for providing long term good communication, essential for any relationship. But it does not necessarily give anything more than that.

Aspects between Saturns can also cause difficulties. More so, Saturn on sensitive points in the partner's chart, like the Sun, Moon or Ascendant, can cause suffering or alienation. Saturn conjunct Mars or Venus can also cause problems.

Even if two charts have much compatibility, it is of little consequence if the planetary periods or timing is not good. In addition, the annual chart or Varshaphal and transits should be examined, particularly as to planets in or aspecting the seventh house and seventh lord.