A Virgo woman and a Libra man share a compatible relationship but there is no guarantee that the relationship would last long enough. The Virgo girl is very practical and has a negative overlook of anything in life. He on the other hand is vvery emotional and indecisive that would just knock the Virgo girl off. If both decide to compromise and accept each others
negatives and positives in a lighter vein then there would be bliss with this combination. Their collective humbleness and plainness takes them together for life though disparity might arise now and then. 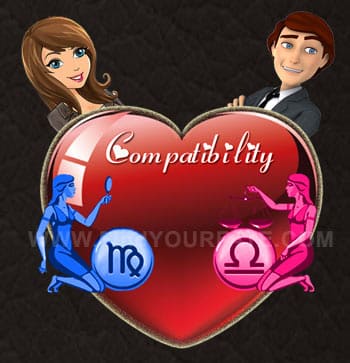 • Jada Pinkett-Smith and Will Smith

The Virgo girl and the Libra guy share a greater compatibility when romance s involved. There would be a warmth and a soft relationship that cannot be expressed in words here.

There would be a beautiful level of intimacy with the duo. But passion would be missing here as it is a waste of energy according to the pair. Both Virgo and Libra are found to be less passionate when compared to the other zodiac people.

A Virgo woman and a Libra man make good friends if not companions in life. This is because they share mutual respect for the partner. For each, the other one is so special in life that there would be a greater compatibility when they are involved as friends in life.

A Virgo female and a Libra male share a very compatible married life. It would be a match made in heaven, very harmonious, peaceful and gentle. The couple would make good citizens and they bear forth good children as well. They manage their finances and relationships carefully. This would be one of the ideal pair for a very compatible marital life in general.

When it comes to having sex, the Virgo girl and the Libra guy again have a compatible affair. They have mutual respect for both and like to satisfy the other half as much as possible. It would be a fulfilling affair though it might be taken as a ritual by the duo. It would be a qualitative affair though they do not have it often.

Usually this relationship thrives well even under adverse conditions. But then if fate would have it that way then both would mutually unwind without any grouse. The separation would be amicably settled, it would be very peaceful for both. The duo would honor and respect the other partner and then move on with life.