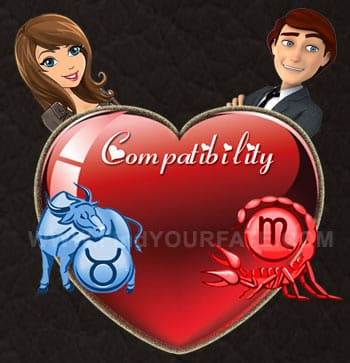 There would be not much romance involved in this relationship but it would be of the right amount to keep the relationship on the right track. Scorpio men are not known for romance or its exhibition. But there would be intimacy, bonding and excitement with this duo. Though too much passion and outward expression cannot be seen, this is one of the combination for the right sense of romance needed for courtship.

The Taurus woman and the Scorpio man are not made to be good friends in life. Scorpios generally are not meant for making friends. They are loners but then when they stick to a person they are loyal and faithful enough. If the Taurus woman needs a friend for life she better find someone apart from the Scorpio guy.

This combination of a Taurus woman and a Scorpio guy is very compatible for marriage. They take the relationship too seriously. Even minor flirts outside the marriage would be a bone of contention in the relationship. The Taurus would be too possessive while the Scorpio might be very much sensitive and sensual. He likes to keep her under his constant watch. The outside world means nothing to them when they are together. But then loyalty, commitment and sincerity would be the main gist of this pair.

For this duo sex is the bread of life. Sexual attraction is the core theme of this relationship. it is used as a sort of emotional bond that binds them together for life. Both see sex as an entertainment too and they make sure that the other half is equally satisfied. They like to spend a long time together in this act and foreplay. The sensual Scorpio finds all ways to attract the Taurus woman sexually.

When the relationship is bound to end then it would be bloodshed all the way. Both take separation as a sort of betrayal of mutual trust and commitment in life. The Taurus female makes all efforts to garner all the material resources herself while the Scorpio guy is bent on ripping off of the self-esteem and prestige of his girl. There would be no place for rapprochement and it would be a permanent ultimatum for the duo.