There would be better compatibility between a Cancer woman and a Libra man. But then much effort and commitment would be needed on both the sides to keep the relationship going on positive territory. The Cancer woman would give him the warmth and coziness needed in a relationship, he in turn would be responsible for the intellectual stimulation of her.
If both understand the needs and desires of the other then the relationship would be great. On the negative side both wants to be the boss of the house. If the Cancer woman is allowed to take over the reins then there would be bliss else chaos. 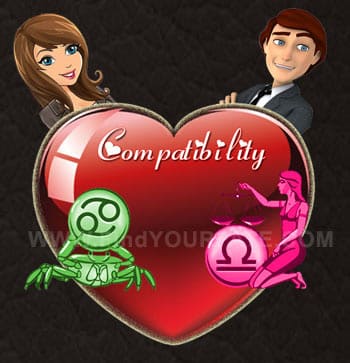 There would not be much romance and passion found in this combination. But the Cancer woman would ask for all forms of romance like roses, wishing cards, candle-light dinner and the like.

If her whims and fantasies are met by the Libra guy then there would be peace on earth. Not much explicit expressions of romance and passion are to be seen here with this pair.

The Cancer girl and a Libra guy just make great friends in life. Both are much concerned about the smallest things in life that life would be bliss for this combo. They just love to devote their time to each other. There would be better understanding as well.The Cancer woman and the Libra guy do not make great friends in life as their interests vary. Also each of them fights to dominate the scene, something that is unwarranted in a good comradeship. But if the duo are involved in a professional or business link then there would be better compatibility in a friendly environment.

There would be compatibility issues between a Cancer woman and a Libra man when it comes to marriage. If both are interested in raising a family, building a great home and the like then it is well and fine. But the Cancer woman just raises the bar every time one of her requests are met. If things go beyond manageable limits for the Libra guy then all hell breaks loose. Mutual trust would do better, but then manipulation would mar the relationship beyond irreparable loss.

There would be better compatibility in sex between a Cancer woman and a Libra man. The Cancer girl is very sensuous and emotional that she wants more and more. The Libra guy would be taken for a ride. Though the Cancer female is of nurturing and motherly nature she asks a price for everything. But then the Libra guy is a great manipulator and hence can take control of her.

When all is not well with the relationship, things just turn from bad to worse. Both would weigh their contribution to the relationship. There would be a lot of talk about equity and the like. But this would be one of the worst endings among all the zodiacs.