The Cancer woman and a Capricorn man share greater levels of compatibility in life. The Capricorn guy would be much practical with life which makes life difficult at times for the Cancer girl. But then if she can coerce him to express his true feelings for her then life would be just too great for this duo. The Cap guy cannot understand the emotions and feelings of the Cancer woman.
However this duo just stick together through thick and thin in life. Together they build a great home around them and are free to welcome in anyone passing the way. 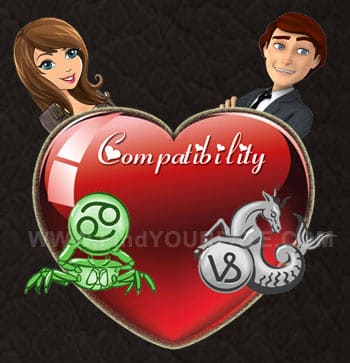 The Cancer woman and her Capricorn partner share greater compatibility in romance.

He is noted for his masculine strength and she for her feminine nature and hence romance and passion come easily for this duo. Moreover she is one who lets him take control of the reigns. There would be frequent romantic moments in their life. But then passions sometime remain on a low -scale.

A Cancer woman and a Capricorn guy do not make friends in life. This is because they share a romantic relationship that is out of the area of comradeship. There would be much bonding and dependency involved here that the duo can be called anything but great friends in life.

Compatibility for marriage would be just the best one among the zodiacs between a Cancer woman and a Capricorn man. Both of them are conventional and have a serious thought about marriage and it aftermath. For them marriage gives security, mutual resources and a great rock to stick to through the turmoil of life. The sense of security that this duo enjoy in marriage would be great. Though the Cancer girl has her own terms of fears about the future, the Cap guy can reassure her in life.

Sex would not be a much compatible affair between the Cancer woman and her Capricorn mate. The Capricorn guy has to woo her to the bed with much fun-fare. She is not much into this thing and settles for anything less quirky. The pair would be comfortable with cuddling and foreplay than the act itself for most of the time.

The end of the relationship would be more decided by the Cancer woman. But this pair stick together till their children are secured in life. Sometimes the end comes if the Cancer girl has lost her interest in sex and sensuality for long and the Cap guy had got tired of wooing her to sleep with him.