There would be a greater level of incompatibility between a Cancer man and a Libra woman. Initially things would seem just fine but with time, it turns sour. One bone of contention with this duo is handling mutual finances. The Cancer loves to save while the Libra woman just loves to splurge. The Cancer guy is more keen on the security of the future while the Libra woman lives life by the day. Misunderstandings would be common.
If they try to sit down, talk and sort things out then things would be better here. Each one tries to be the boss and this results in rifts of sorts. The Cancer guy would take more of a feminine role and the Libra girl, a masculine role and then things turn for the worse. 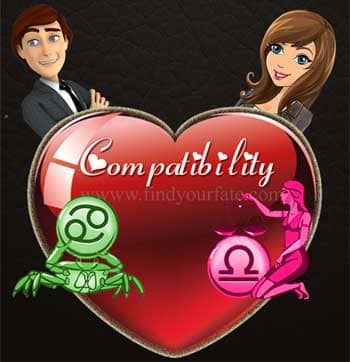 There would not be much compatibility between a Cancer man and a Libra woman in romance. But then they would try their best to show their romantic and passionate moves to their partner but end in vain. Frustration is what would be at the end.

The Cancer male and his Libra female do not make great friends in life either. They would not exhibit much compatibility for comradeship to exist between them. There is no scope for mutual interests and hence a committed friendship is ruled out for this duo.

Initially the Cancer man and the Libra woman seem to make a compatible marriage. But with time rifts slowly start appearing on the horizon. The diplomatic Libra girl wants to run the show but would be subdued by her Cancer partner. She would show constant signs of nagging, bossiness and aggressiveness. The Cancer guy would not be happy with the same, resulting in his whining. There would be periodic bouts of fights and misunderstandings that show signs of separation.

There would be no compatibility when it comes to sex between a Cancer man and a Libra woman. This natural act would be a complicated task for the duo. The chemistry between them also does not suggest something rosy in this area. They withhold sex as a means of revenge or retaliation for the acts done in the daylight.

The end comes naturally between the Cancer guy and the Libra girl, because they are never found to be compromising or compatible enough in life. Even after years of separation the Libra girl would be holding onto grudges and the Cancer man is in shortchange of this too.