The relationship between a Cancer man and a Cancer woman would be a very reliable and loving one. However when things are not that good there would be a sullen atmosphere here with this duo. There would be a mountain of emotions involved.One of them has to give way when the other one turns too moody with life. Too much of clinging and emotions would also ruin the relationship.
The Cancer woman is more adept in handling household chores with ease. She would bring about a tenderness to the marriage. The Cancer man on the other hand is more protective of his partner, their children, their parents and other mutual resources. Children, elders and family would be best ones to get the most out of this relationship. 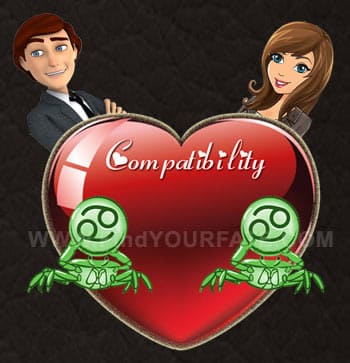 There would not be much romance and passion seen her in this relationship between the Cancer duo, though there would be no scant for emotions and feelings. Both would be more bent on the security of the household and managing material resources that there would be barely no time left for singing around the bushes. Together they are more passionate of the family as a whole.

There would be better rapport with this duo but they do not make great friends in life. This is because they do not maintain the minimal distance needed for a friendship to survive the test of time. Both are more concerned about the needs and other emotional matters that comradeship would be totally lost here.

The Cancer man and the Cancer woman make a great compatible marriage. Both are more concerned about the welfare and security of the family as a whole, this mutual interest keeps them going despite tough times. Each of them would have a hold over the other during tough time. They like to have an unconditional attachment with their partner, which sometimes becomes more obsessive. A sense of insecurity looms around both. But then much love and warmth would be found with this duo.

There would not be much compatibility with this pair when sex in concerned. The reason being both are not more interested in sex, particularly physical intimacy. They have sex just because it brings in a sense of security for both. They take it as a prerequisite for providing the other needs and security in life. At times both forego sex as nurturing and managing the family resources take the centre-stage.

When it is all over in this relationship, it would be like two small kids crying over spilt milk. They turn to some elders or counselors for solace and advise. The third party ultimately would be much benefitted by the split. They would be ready to barge on the mutual resources the duo shared.