The Aries woman and the Aquarius man would take some time to adjust to each other. But they appreciate each other and have mutual respect and trust. The Aquarius man's sense of adventure and the intelligence and passion of the Aries just get together easily. There would be occasional rifts which could be untied easily. Lots of commitment and courage would be found in this pair.
Both would be goal oriented and have social inclinations and hence the going would not be that tough. 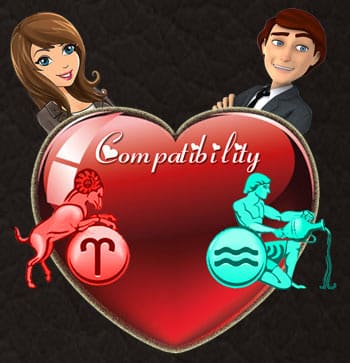 Though this relationship shows promising signs, not much romance would be involved here.

Aquarius though loyal is not committed and does not show explicit signs of his romantic moods. However much passion and commitment could be seen by both not towards each other but to the outside world at large as their attachment is universal.

An Aries woman and an Aquarius man make good friends for life. Aquarians are loyal and committed. If the Aries female gives him the needed freedom and personal space then this would be a winning combo. The Aries gives the Aquarius the much needed confidence in life and the Aquarius likes the strength that she gives to fortify her.

Sex would be just an average sport and fun for this duo. The Aries takes this act passionately. The Aquarius though has his mind elsewhere makes sure that he turns on the Aries girl.

The Aries woman would sense the end of the game only long after the relationship has turned sour. The Aquarius man just switches on and off his contacts as and when he thinks like. The impatient nature of the Aries woman makes conditions worse.