Vastu the most powerful Vedic science brings hope to the darkness of ill luck in life. The complete understanding of direction, geography, topography, environment and physics in vastu helps in incorporating the rules of this particular science in the field of construction to make better life systems . 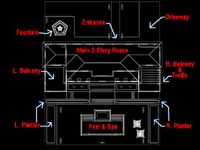 A house which is constructed keeping vastu principles in mind drives the negative energy and instead brings peace, success, supreme powers, holiness and opulence to the dwellers residing in the house. Thus vastu acts as a bridge between man and nature. The word Vastu is derived from the Sanskrit root 'Vas-Niwase', which literally means 'a liveable space' or, a space worth living in. Ultimately a house is considered lucky when it brings happiness, prosperity & a sense of fulfillment.According to vastu the north and east facing house is considered to be better when compared to one facing west or south. However such faults can be rectified with the help of vastu remedies. At times even a north facing house gives troubles which can be balanced by suspending a six-rod metal wind chime over the main door and also added by painting the main door with off white, pale blue and light teak.

For a southeast facing door vastu offers remedies by placing a single decorative urn filled with water and fresh flower petals to the left of the door from inside. This can also be accompanied by placing lot of fresh flowering plants on inside and outside of the southeast door. When the main door is facing south it can be corrected by painting the door with deep maroon, shades of pale yellow or shades of vermillion red. The effects of a west facing door can be nullified by suspending faceted glass crystals which refracts the evening light and reduces the damage and alternatively the spectrum of colours transforms the energy at the doorway. Any flaws at the main door can be corrected by placing green and tall healthy plants along with a pyramid above the main door to transform the bad energy.

If a river or a drain flowing in a wrong direction and in a wrong movement then vastu advises to place a statue of dancing Ganeshji facing the west on the north-east corner of the house. Similarly if there is a problem where the boring has taken place then a picture of Panchmukhi Hanumanji, facing South-West to the boring is said to be considered as a remedy. In vastu it is always advisable not to leave any wall naked especially the wall we see as we enter the house. So a picture of Ganeshji must be placed on it as a bare wall signifies loneliness. In certain cases, energy circles can be improved by using Swastika Yantra which requires a lot of care. When there is a high voltage wire passing overhead in a plot, then it is corrected by running a plastic pipe filled with lime from one corner to the other with both the ends remaining outside by at least three feet each. This will eliminate the evil effects of energy being generated out of the overhead wire.

Kitchen is a very essential part of the house for it is the place where we cook our everyday food.When we build a kitchen several factors should be taken into account like placing of the sink, location of the gas, refrigerator, gas cylinder, and much more. The main fact is that it should always be built in the south east portion of the house failing which will curtail peace and mutual love in the family. If kitchen is built in any other portion then vastu says that the cooking arrangement is in such a way that we face the east only and it is always better to use a red cooking slab.

General health deterioration happens when the tube well is not rightly placed. The tube well should always be in the North-east direction and the place should remain open at the house's lowest level. In case of toilets, it can be constructed towards the West or South with face facing the north or West during discharging stool.

The prayer room should always be located either in the Northeast corner or in the central portion (Brahmasthana) of the house. Prayers should always be performed in such a way that we face the east for better concentration .For such a set up the pictures of the god should touch the wall on the East side in the prayer room facing West. If there is any disturbance in such arrangements vaastu rectifies by placing the idols of the god and goddess in the right direction and stick close with the door placement. Proscribed raw material is not advisable according to vastu while constructing the puja room.

If your plot has missing corners then it can be corrected inside the house. For example, if a portion of the north and east segments are missing, then placing a water feature or urn of water with flowers at the northeast sector of the living room alleviates the ill effect. Placing tulsi plants at the northeast sector of the plot or even in balconies can transform any bad energy into positive and good energy. Similarly, jasmine plants can bring in a flow of good energy with a wisp of its fragrance.

The directions of East and West are important as far as obtaining the energy from the sun is concerned. The importance of the directions of the North and the South lies in the flow of magnetic waves which flows from North Pole to South Pole. Therefore southward portion of every building should be higher than the northward portion.

Bedroom is a place where by the end of the day we wind up all our tensions and worry, so care should be taken when we position this room according to vastu principles. Master bedroom should be located in the south west corner of the house with head always positioned towards the direction of the south for north side facing will always disturb the sleep. Bedroom in the North West direction can be used by guests and girls. A bedroom in south east direction may harm the study of the children and any decision taken here will not be correct. Thus if the bedroom is not built appropriate with the stands of Vastu principles then it will often lead to clashes and misunderstandings with your better-half along with everlasting health troubles.

The best location to construct the bathroom is the eastern part of the home for the rays of the morning sun can enter and promote the health of the user. Other recommendable location for the toilets is southeast, central south or central west. Closets in the toilets should face North or South, along the North-South axis; and should not face the East or West. If the toilets are not located in any of these appropriate places then vastu gives remedies by placing geyser in the south-east corner. Mirrors in the toilet and dressing room should be on the North or East walls.

Can I continue with my present career?

When will my health be OK?

When will I get rich?