Guru Peyarchi as called in Indian Astrology is the transit of Jupiter.

It is an important phenomenon in astrological terms. In 2013 Guru Peyarchi is on May 31,

or Guru is moving from Rishabha (Taurus) Rasi to Mithuna (Gemini) Rasi and will be there till June 19th, 2014.

Jupiter transits in Mithuna (Gemini) Rasi in different stars as below: 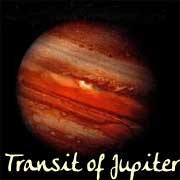 This guru peyarchi or Jupiter transit will be excellent time for the following 5 rasis:

This guru peyarchi would be very bad for the following rasis:

Meenam (Pisces) and Katagam (Cancer) will have mixed results during this transit of Jupiter.

The transit of Jupiter is very important in astrology as Jupiter is an auspicious planet that bestows good results on people, be it finances, marriage or career. Kumba rasi people or those under Aquarius Moon sign are those who have the best results during this Guru Peyarchi. Dhanus or Sagittarius Rasi people who would have got a big fall recently would be able to stand up during this transit period of Jupiter. Tula or Libra Rasi people shall have goodness bestowed but should be cautious in all their moves.

Simha or Leo and Rishabha or Taurus sign people in general shall have a good period during this Jupiter transit. Makara or Capricorn and Vrischikha or Scorpio Rasi people shall have a bad period for the next one year. Mithuna or Gemini and Mesha or Aries Moon sign people would continue to have problems in their lives. Those born under Kanni or Virgo Rasi shall face problems in the career front.