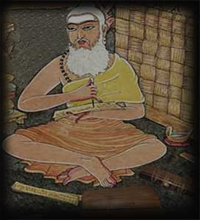 Nadi Astrology is an ancient Indian method of Astrology to learn about one's past, present and the future.It is said that thousands of years ago, the great sages of Indian had the power to look into the past and future of the entire universe and recorded the life of each human being who either lived, were living or were to live. At some point of time ,these discussions were written on palm leaves in an ancient Tamil script,which can now only be deciphered by expert Nadi astrologers. NADI in Tamil means in search of. Because one individual goes in search of his details in the nadi, this system came to be called by this name. The palm leaf inscriptions are scattered throughout India.
Nadi Shastra

Get your Nadi Reading

Each Nadi is made up of a particular ola or palm leaf, written in Vatta Ezhuthu , a Tamil script, with a sharp, nail-like instrument called Ezhuthani. The palm leaves are preserved by rubbing peacock oil on auspicious occasions. These palm leaves are still preserved in the Saravasti Mahal library of Tanjore(Thanjavur), in the South Indian state of Tamil Nadu.

The primary centre for Nadi Shastra is in Vaitheeswarankoil, near Chidambaram in Tamil Nadu, a state in South India. The palm leaf inscription of an individual is spotted out by his thumb impression. Lines on the thumb of people on the earth are are classified into 108 types. The Nadi palm leaves are arranged according to these types. The Nadi readers identify the particular

Leaves are there not only for Indian nationals but also for foreigners and other nationals belonging to other religions and creeds.Destiny has leaves for those who wished to have their readings.It is also stated that about 40% of the people in the world only are likely to get these results as available.The other leaves might have been damaged or lost in the course of time.