The Taurus woman and the Capricorn man are compatible enough in a relationship. They are the perfect soul-mates for each other. They share common interests and goals in life that life would be good together. The Taurus woman would show her loyalty and trust-worthiness to her partner, while he in return makes her the most prized possession in his life.
Life would not be boring and lonely for either of them. Both being earthy signs they have a penchant for material resources. They are known to garner anything under the Sun together. 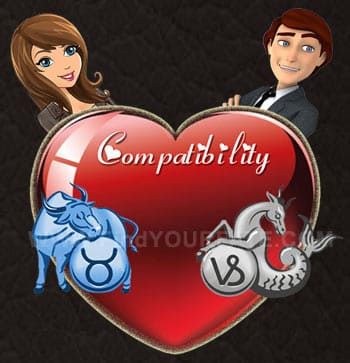 Both the Taurus woman and the Capricorn man are very practical that they are not much interested in showing their romance. But he makes it a point to shower material prizes on his other half. Both have some hidden passion and romance which would be utilized when they are quite alone in each other's company. There would be no public displays of love and passion.

Capricorn is usually not much bent on making friends in life. If somebody could help him in his professional growth then he can taken as a friend. Capricorn has a clear demarcation between a friend, lover, spouse and the like. The Taurus woman on the other hand is also not an extrovert to make friends in life. But if the duo share common interests then they can just cling on to each other as friends at least for sometime.

The Taurus woman and the Capricorn man make a very compatible marriage. Theirs would be based on values and traditions of the society. If both are interested in having children, have a house, luxury cars and the like, then this would be the ideal combination. There would be no beating about the bushes, romantic songs and the like here with this duo. Both are practical and down-to-earth in the relaitonship.

Sex would be a natural phenomenon for this couple. The Capricorn guy would fulfill his duty and he is not bothered if his partner is satisfied or not. The Taurus woman is also not much interested in the feelings and emotions of the Capricorn and is OK if her sense of security is confirmed. Emotions, and moods do not mix up in sex for this combination.

The Taurus woman and the Capricorn guy make a very compatible relationship that usually there would be no break-up. But then if at all it has to happen, the Capricorn male makes sure that everything is settled in life as in a professional rewinding. The Taurus woman also holds no grudges once her temperament is under check.