The Taurus woman and the Aquarius man do not make a compatible partnership for marriage or relationship. Both are stubborn signs and stick to their ideals and ideas in life. But then the Aquarius man can teach her to have some fun with life and the Taurus female can bring stability in his life.The too conservative Taurus girl and the out-going Aquarius guy do not have anything in common to drag along.
The Taurus woman's too much interest in monetary benefits would also ruin this relationship for the worst. 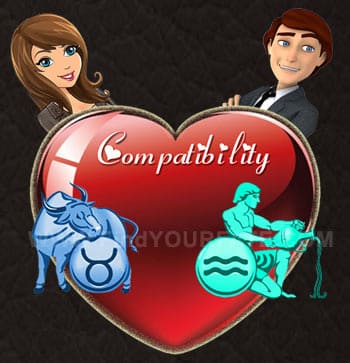 There is not much romance involved with this duo as Aquarius is not much into this. He takes his partner as a friend and does not have special feelings towards her. He keeps her busy all day long that there would not be any time left for romantic moves. The Taurus woman is more focused on material possessions and Aquarius is more bent on the outside world that they lead separate lives in this area.

The Aquarius man and the Taurus woman make one of the best friendships among the zodiacs. The Aquarius man is more humane in nature, while the Taurus girl has to bend a little for him as she is not one to make friends that easily, being an introvert. Though not much friendly ultimately she would yield to his friendship, love and loyalty.

The Taurus female and the Aquarius male are not compatible for marriage. But they stick together just for the sake of the outside world. They are too stubborn to admit each other's positives. The Aquarius finds solace in the outside world, while the Taurus girl would be much involved in caring for her house that each would not find any time for incompatibility or misunderstandings in the marriage. The Taurus' possessiveness also wreaks havoc in the marriage.

The duo are not compatible enough for the act of sex too. Taurus is too sensual and physically-aroused while the Aquarius is aroused by fantasies and virtual moves. Hence there would not be mutual interest here for both. Though the Aquarian would be satisfied by sex now and then, the physically-craving Taurus is usually depleted of all his energies.

When it is the end of the road for these two then there would be much fireworks. Both being stubborn signs, the end would be a great climax. The Taurus woman is quick to show her temper and likes to dominate the Aquarian. He on the other hand is not one to yield and quickly quits the scene. The bystanders would be the worst affected by this end game.

• Taurus Love Match with other Signs