The compatibility between a Scorpio woman and a Sagittarius man would not be that great. Usually this combination doest not meet with success as both the signs have many dissimilarities among themselves. The Scorpio girl needs commitment and security in life while the Sagittarius guy is a jolly-go-lucky fellow who is not there for any sort of commitment,wants his freedom and ample time for adventure.
He is not one to co-operate in domestic endeavors too. But then both are lovers of truth and righteous living and this takes them together. If they could consolidate their fortes like the intelligence of the Sagittarius and the instincts of the Scorpio, then this relationship can work out well for the long run ahead. 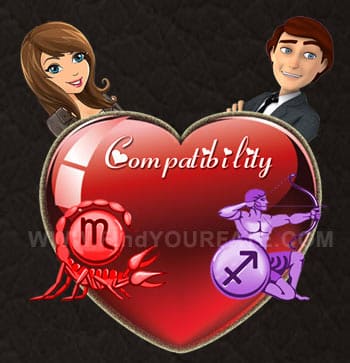 There would be better compatibility for romance with this pair initially.

But with time, there would be signs of stress. Scorpio is adept in bringing out the passion of the Sagittarius guy. But the Sagittarius man is more bent on directing this passion on his ideas rather than on his partner. Hence the romance and passion do not last long here and loses steam as soon as it began.

The Scorpio female and the Sagittarius male make one of the best friendships among the zodiac signs. They are honest to each other and are loyal and serious to the core. They have mutual respect for each other and grow together gracefully. This combination makes best friends for life and hence the compatibility would be one of the best among the zodiacs.

A Scorpio woman and a Sagittarius man make up a good compatible marriage. It would be a trust-worthy relationship as both are interested to get along with the other one in life. Though Scorpio might be secretly testing the Sagittarius guy he would come out with flying colors. There would be a good level of communication between them that gets them along in life. They would not let down their partners in times of distress and make sure that they hold them in high esteem in their society. Morality would be the key for the success of this marriage.

Sex would be a highly compatible affair between a Scorpio girl and a Sagittarius guy. There would be a total communion of body and soul that both relish the act every-time they have it. They are likely to be taken to the higher realms of ecstasy and eroticism. With time, they become well-versed in the nuances and the tricks of the trade that they know how to satisfy their partner on a sexual level.

the relationship between a Scorpio female and a Sagittarius male is a good one and is unlikely to end. but then if it had to then it would be a great disaster waiting to happen. The Scorpio woman would be in full control over the split and the Sagittarius man would not be kind enough during the split. it is better that the duo mend fences and come to the tables for rapprochement talks..