The relationship between a Scorpio woman and a Scorpio man would be highly compatible. This is a very powerful combination that would result in love and success in relationships and marriage. The two are just made for each other. Scorpios being discrete and secretive cannot be easily understand by any other sign but by themselves alone.
Hence this barrier is broken here in this combination of a Scorpio guy with a Scorpio girl. There would be an electrifying relationship and the magnetism involved with this couple would be just great. 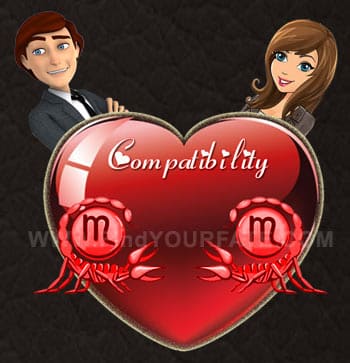 The compatibility for romance would be off the charts for this duo.

Scorpios are said to be one the most romantic and passionate lovers in the zodiac signs with much eroticism on the sets. There would be much intensity and devotion found here. They would be ready to sacrifice or do anything for the sake of their partner. They just stick on to each other for life.

The compatibility for friendship with this duo is also great as only a Scorpio can read and understand anther Scorpio in this world and none other. There would be mutual sincerity, trust and admiration of both. together they revel in each other's company regardless of the mad world around them.

There would be an excellent compatibility between a Scorpio man and a Scorpio woman in a marriage. Together they move ahead in the married life with mutual love and trust. With time, the relationship ripens and the level of intimacy deepens. Each one contributes his or her all to the betterment of the marriage in the long run.

This relationship lasts long till the end of times. Even if fate or time has a will to change or break the cord, this bond lasts strong enough to stem the tide of aggression against this combination.