The Scorpio man and an Aquarius man have a better compatibility in their relationship as the chemistry between them is just great. Though there would be differences between them they make all efforts to erase these. The Scorpio man would be much possessive that would annoy the Aquarius girl. She in turn would be outgoing which might make him feel insecure with life.
But then they have strong willpower and mutual purpose in life that gels them together. Though there would be lack of compromise and warmth, certain reasons compel them to be together for life. The Scorpio guy is one who cannot be taken for granted and the Aquarius girl would be out of bounds that it would be impossible for any other signs to carry on life with this duo than they themselves. 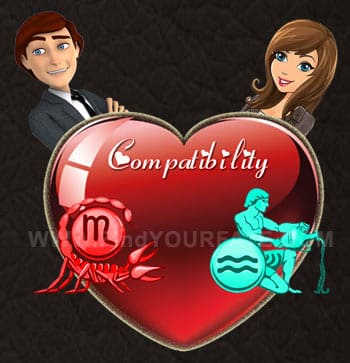 There would be no romance and passion seen here with this pair that compatibility is totally out of question. Power rules the roost in this combination and not romance.

Also both think that passion and romance is a complete waste of time. They have other important tasks in life to cater to.

Though the Scorpio man and the Aquarius woman are not made to be great friends for life, the spirit of comradeship exists when one of them has a slight dominance over the other. There would be a constant struggle for power in both their lives and when they decide to culminate their powers together then this would be a formidable comradeship that cannot be broken by any other power on earth.

The Scorpio man and the Aquarius woman do not share a compatible marriage. Commitment is ruled out here but they can stick together with a mutual bond of trust between them. Each one knows that he or she cannot survive without the other in this wicked world. They also very well know that they cannot be in a compatible marriage with any other zodiac sign.

Sex would be the bond that ties this duo together despite the differences in their opinions. They share this thrill as an adventure together. The Aquarius girl dominates the sexual scene and the Scorpio guy would just love to be pampered with. A greater level of compatibility exists here between the Scorpio guy and the Aquarius girl.

This is one combination where if the end is in sight then it would be a very bad situation for both. There would be many attacks and counter -attacks and no rapprochement in sight. If the individual has to survive then he or she should be willing to forego any mutual resources on the cards. There would be no turning back for both.