A Libra woman and a Scorpio man would not have much compatibility when they are in a relationship. Initially there would be a strong attraction with this duo but with time there would be strains involved. The Scorpio guy's strong-headedness might not be taken well by the Libra girl. Also her love of freedom would not be liked by the Scorpio guy.
The duo would be packed with much energy and power. Scorpio provides the power and the Libra woman would give in for the social commitments. 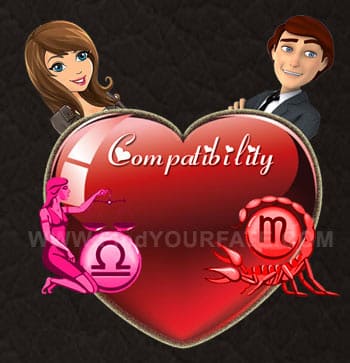 The Libra woman would be full of a romantic appeal. She expects her partner to follow suit but the Scorpio guy is not one to budge here in this area.

But then the Scorpio man would be loaded with much passion which would be smothered down by the Libra girl for the worst. She keeps the Scorpio fellow's emotions under constant check.

A Libra woman and a Scorpio man do not make great friends in life but then they would be having a good comradeship when work is concerned. As friends they can get along only under a romantic note. Once this pair comes together they can achieve great things in life. But the true spirit of friendship would be missing here with this pair.

The Libra woman and her Scorpio partner share a compatible married life though occasional rifts and troubles cannot be ruled out. But the marriage would stay strong against the tides of life. The relationship progresses slowly but steadily with time. Major and minor separations are usually found in the marriage.

Sex would be a compatible affair when a Libra female and a Scorpio male are involved. The Scorpio guy is sexually very active and the Libra girl just concedes to him. She would be most desired by him and she in turn would turn this in favor of her by trying to harness him under her total control.

When a Libra woman and a Scorpio man have decided to end their relationship then it would be a bitter ending for both. All kinds of negotiations or pacifications do not work here. Separations are a common happening here with this duo that they take the endgame on a similar note much to the surprise of the families involved.