A Libra woman and an Aquarius man share a compatible life together. The Libra girl makes the Aquarius guy committed in life. The Aquarius man's adventurous spirit would be liked by her and he in turn would like her balanced approach towards life. There would be no domineering and they bring out the best in their partners. However being airy signs there would be some detachment in the relationship.
The Aquarius male needs the Libra female to complete his socializing tasks. Libra brings balance to the relationship despite odds at times. 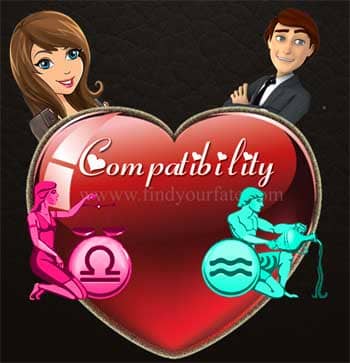 There would be a compatible romantic affair between the Libra female and her Aquarius partner. He would do just anything for her to win her romance and passion in life. But then the Libra girl has to woo and push him to get things done on this level because the Aquarius guy is not an emotional one.

There would be greater compatibility when a Libra woman and an Aquarius man are involved in a friendly relationship. They just make best friends for life. There would be no turning back here. The Aquarius guy showers his affection on the Libra girl. The comradeship survives the test of time as both of them understand each other's freedom and space in life.

A Libra girl and an Aquarius guy constitute a very compatible marital relationship. Both of them are logical people, they would compromise for just about anything under the Sun and mutual freedom is accepted in the relationship. Also the duo know how to rebound after a split or rift in life. The relationship picks up pace or momentum with time and there would be no hurrying here which is the cause for most of the break-ups. Mutual trust and acceptance is the key to survival with this pair.

Sex would also be a very compatible affair with this duo. It would be an important part of their life together. There would be a good balance and they make sure that mutual interests are met. Libra with her romantic nature would bring out romance and passion in the love-making process. He would be polite to take it for granted. But he asks for something new every other time they sleep together as he is not one to have a monotonous lifestyle.

When the relationship seems to be at the end of the road, it is usually the Aquarius male who would call it quits. Being a fixed sign he is likely to stay but if he is sure that the Libra girl is not for his asking then he just gets out of the door never to return back. Any kind of pacification by the Libra girl would not work here.