There would be not much compatibility when a Libra woman and a Libra man are involved in a relationship. Each one needs his or her own space. If they understand this attitude of them then there would be goodness in the relationship. As both are cardinal signs there would be a clash of egos and a question of who leads whom. But then if they decide to
pool in their mutual resources then this would be a winning combo. Together they can climb mountains if their brains and brawns are shared. 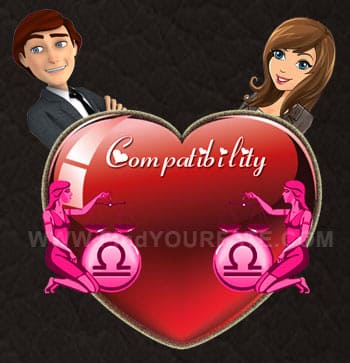 As Libra is a romantic sign there would be much compatibility when romance and passion are under question as a pair of romantic heads are involved. Romance is where each one puts his heart and soul. They make sure that they satisfy their partner on a romantic note by extravagant presents. Also a good deal of passion would be found here with this combo. It would be an impulsive act by both involved but they do not admit to the same.

Both the Libras make good compatible friends for life. A balanced approach to life and fairness in everything would be their mutual motto in life. They share their thoughts on a noble note while for others outside the relationship the comradeship seems to be a little self-oriented.

When a Libra male and a Libra female are into marriage then it would be more or less a compatible affair. Each would be a mirror for the other one to take notice. There would be perfect balance of acts, good judgment and co-operative ventures at home. With time there would be perfection in the relationship with the pair learning from their past mistakes and misdeeds.

Sex would be a compatible act between a Libra male and a Libra female. It would be a carefully executed act which means everything for the duo. It would be a way by which the pair gets to know a lot about the likes and dislikes of the other.

This is one combination where the end game would be a very tough and time-consuming procedure as and how the relation started in the first place. All mutual resources need to divided amicably in a balanced manner else there would be a bloodbath. Also the duo are known for after-thoughts which might mar the relationship even after the legal split.