The Leo woman and the Virgo man would not be much compatible in life. The Leo woman expresses much love and affection to her partner but he would not reciprocate the same. The Virgo guy wants his partner to be submissive which would not go well with the Leo lady. She wants to be the boss of the house. There would be rifts owing to finances as well.
The Virgo man would be consistent while the Leo girl likes to take risks with life and is very impulsive. But both being duty-conscious, the relationship would endeavor. Work ethics bind them together. 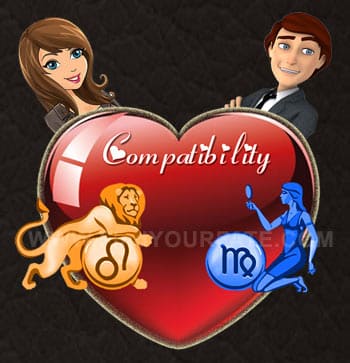 The Leo woman and the Virgo man share greater compatibility in romance. The Virgo guy would have found the right romantic audience in the Leo girl. She would be forgiving and does not look much over the insecurities of the Virgo guy. The Leo is a sign of passion and hence passions would also flow on a regular basis here. She would provide the right ambience for love, romance and passion in the relationship.

The Leo woman and the Virgo man do not make great compatible friends. This is because their selfish nature keeps them out of the relationship. However they share a reliable relationship that can be called better as companionship.

The compatibility for marriage would be great between a Leo female and a Virgo male. Usually this relationship boils down to a stable marriage. Both respect the institution of marriage. If the Virgo guy can keep his Leo girl engaged then there would be bliss at home. Usually Leos dominate the scene but if the Virgo guy plays his cards right then he can bring her to his control easily.

Sex would be a very compatible affair between a Leo female and a Virgo male. They need a steady dose of the same and each would be more than willing to satisfy the partner. Virgo guy has a number of tricks and poses up his sleeves to ground his Leo girl. She is not one to shy off from this act. She would be equally delighted to keep him engaged in bed by her thrills and wits.

When the game gets over with this relationship then it would terminate in a business-like manner. Both of them would have been fair in the relationship and hence there would not be any hard feelings on both the sides. Though they are unlikely to come for any rapprochement of sorts, they can count on their ex-partner in times of need.