There would not be much compatibility between a Leo woman and a Scorpio man. The Scorpio guy is short on patience which does not go well with the Leo girl. She in turn would be full of passion and desires which is beyond the Scorpio guys' area. Tempers run wild and each tries to boss around the other. If both take turns to be the boss and tempers are controlled then the relationship would work out well.
This is an intense combination where each one tries to conquer the other but in vain. Sex is something that would be intense when compared to any other zodiac combination. 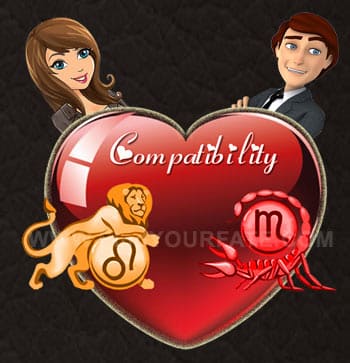 The compatibility for romance would be great between a Leo woman and a Scorpio man. There would be no dearth for romance and passion here.

Leo is known for eroticism and romance while the Scorpio guy for emotions. Hence the chase would be great so also the thrills attached with this combo when in romance.

The Leo woman and the Scorpio man do not have any mutual traits for friendship to thrive. Usually the relationship ends in betrayal of sorts. Hence it is best advised for this pair to stay away from any sort of comradeship. The Leo woman exhibits royal traits and expects the same from the Scorpio guy who is more than crude in nature. Both get offended easily and hence friendship is ruled out for this combo.

The Leo woman and the Scorpio man make a compatible marriage. Both being fixed signs, much loyalty and devotion would be seen in this pair. Once they settle down with their marital life, troubles slowly brew up. But then both of them stick to it and do not find ways to stray. Though there would be some incompatible issues now and then the marriage keeps going in a positive direction.

The end of the road for this pair would be really pathetic. Both of them are known to exaggerate the wrongs of the other. They are not for rapprochements of any sort in life. Hence the end comes naturally for this duo. Betrayals would be common and though they would not hurt each other, they eventually fall short of love in the relationship.