The Leo woman and the Aquarius man share a compatible relationship in life. If the Leo woman would give the Aquarius man his due share of freedom and teach him the intricacies of a bond then there would be no issues. The Leo girl wants attention, love and warmth which the Aquarius guy should be more than willing to offer, but it is not his usual cup of tea.
If both stay away from criticism then there would be bliss with this combo. They share better chemistry and there would be alternating moments and of hot and cold endeavors. The daring Aquarius guy just sweeps off his lioness by his thrills. 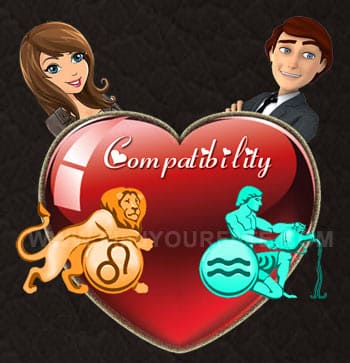 There would be much romance and passion involved in this relationship.

The Leo female and the Aquarius male make up a good pair when it comes to marriage compatibility. The initial attraction would be great but then with time it shows some signs of falling off. But their humor clears up the mess they have created. If the Leo girl would not demand too much attention from him and he in turn does not ask for too much freedom then the marriage would last long.

Sex would be a highly compatible affair between a Leo woman and an Aquarius man. It would be a highly satisfying and entertaining act for both of them. Though the Leo girl sticks to conventional methods, the Aquarius guy has lots of tricks up his sleeves. The duo are great in experimenting with new ideas in this area.

The end of the relationship would be very terrible. Finances would be one of the bone of contention for this duo. When the Aquarius guy discovers that the end is near be just bids goodbye and is out for fresh air of freedom. The Leo girl worries over the waste of time and resources on him. She would be a major loser in this game.