Though the Leo man and the Scorpio woman share greater compatibility in life, there would be some troubles for the long term prospects of the relationship.Their temperaments usually clash leaving a rift in the relationship. The Leo guy is after love, romance and adventure in life while the Scorpio girl needs intense passion. Both are strong-willed personalities that are not ready for any sort of compromise.
But then this would be a much talked about duo in the colony. Leo would be loyal and faithful while the Scorpio female would be highly suspicious of his moves. 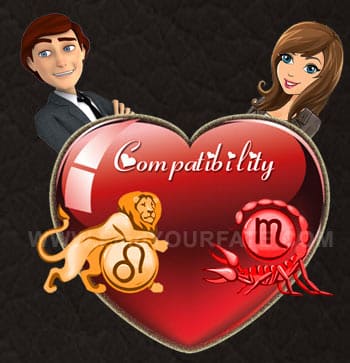 The Leo guy and the Scorpio girl are very much compatible in romance and passion as both are loaded with tons of this. This is one of the best passionate combinations in the zodiac. Leo is known for emotions and eroticism while the Scorpio has intense passion loaded within her that the pair would be on fire anytime.

The Leo man and the Scorpio woman share no compatibility when it comes to the relationship of being friends. Hardly anything exists of mutual interest that comradeship is ruled out of this duo.

The Leo male and the Scorpio female share a very compatible marriage. As both are loyal to the core and do not stray this relationship would thrive till the end of the days. If both of them would balance their life then there would be goodness. They believe in the institution of marriage and remain committed for life. The Leo guy easily conquers the Scorpio girl. She in turn drives the Leo guy crazy by her intense passion.

When it is the end of the road for the pair, then the results would be simply devastating for both. The Leo guy would be broken to the core while the Scorpio girl would be loaded with bitter emotions and vindictive thoughts. Both would suffer a lot on account of the break-up.