There would not be much compatibility between a Leo man and an Aquarius woman. Much effort and commitment would be needed from both the sides to keep the relationship going. The Leo guy yearns for attachment while she craves for a detached atmosphere at home. The Leo man would be concerned about himself more while she would be concerned about the whole of humanity.
There would be an initial attraction but with time there would be outrageous acts from both. The duo would be at logger-heads most of the time. 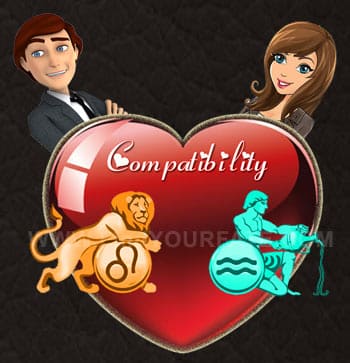 The Leo man is more romantic but the Aquarius woman is not interested in focusing her passion for just one man in the whole universe.

She has a universal heart to be shared by all. Hence she keeps the Leo guy at a distance only that passion in the relationship is smothered. He in turn would very much like to annoy her at the slightest instance possible.

The Leo man and the Aquarius woman do not make good friends. They are just the opposites when it comes to this relationship. The Leo male is one of warmth, loyalty and pureness. While the Aquarius girl has no real heart at all that comradeship is just ruled out for this pair.

This is one of the combination where the compatibility for marriage works out for the least probability. The sensuous and romantic Leo proceeds in a positive direction in the marriage. But the Aquarius female makes all efforts to dismantle the setup. The Leo man tolerates this until when the load-bearing strength of him falters.

The compatibility for sex with this pair would also be the least among the zodiacs. It would be a frustrating experience for both. Leo yearns for warmth and affection while the Aquarius female is not bothered to satisfy him. There would hardly be any agreement here with this pair that it would be a total fiasco most of the time. With time both develop lack of interest in having sex.

With the compatibility for romance, marriage or friendship at the bottom level of the chart for this pair, the end game would be an easy affair. Though the Leo guy would feel deprived of a company as he yearns for love and affection, the Aquarius girl does not have any regrets in losing him. She would be more than happy to get her total freedom back in life.