The level of compatibility with this pair would be on an average scale only. Initially there would be much attraction between the Gemini woman and the Pisces man, but then things start to change for the worst.Only compromise can take the relationship far off. The Gemini's sharp tongue usually hurts her Pisces partner and he would not be able to comprehend the moves of his flirting partner.
But then they are friendly and love talking around about others but forget to talk out their differences in life. 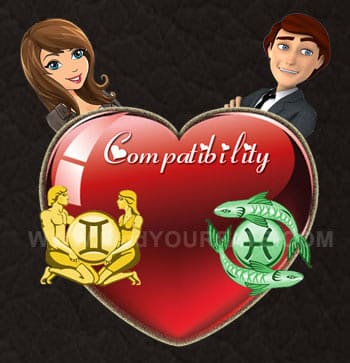 There would be a romantic relationship with this duo as both are adventurous and seek romantic outings together. They love partying and socializing. But the level of passion involved would be very less.

There would be much communication while physical and emotional sides are usually the neglected lot. The Pisces guy should bring down his expectation level on the romantic front. The Gemini woman is one who is willing to experiment new tactics in this area with her partner.

The Gemini woman and the Pisces man make great friends. Both do not make attempts to dominate over the other. Gemini likes to entertain and the Pisces would be a great audience to go with. The duo are adept in a good and meaningful conversation that there would be scope for a great friendship to evolve here.

The Gemini woman and a Pisces man do make a compatible marriage. Both are interested in socializing and this takes them along easily. They are not hesitant to talk about money, sex and other sensitive subjects on the planet. Together they handle tasks and tackle problems on a common ground. Hence there would be a strong footing here with this duo. But then the Gemini woman needs to bring in some entertainment into the relationship as the Pisces guy would be a lazy couch potato otherwise.

There would be a better level of compatibility in sex for this pair. Both are more involved in making sensuous talks and other conversations that the physical act comes last. They spend most of their time in the bed talking. But then it binds them together and dispels all negative energy from the scene.and every encounter would be overwhelming. They love to have sex at the quirkiest time and the least- to do place. It would be a thrilling adventure for both.

When the relationship turns sour it is usually the Gemini woman who has to call it off. She needs to take the initiative and get things settled. The Pisces man generally gets depressed and loses faith in life, he would not even fight for his legal rights.

• Gemini Love Match with other Signs