There would not be much compatibility between a Gemini man and a Pisces woman in life. This is because they have nothing in common and they have varied interests and ideals. Gemini is fond of constant change while Pisces has long-felt desires. Gemini is not emotionally bound while the Pisces lady is. But hey then make great friends rather than lovers or partners.
This is because they love talking a lot and their curiosity binds them together. They love travelling and having adventure together. Gemini with his happy-go-lucky nature would help to bring the Pisces down to a happy state. 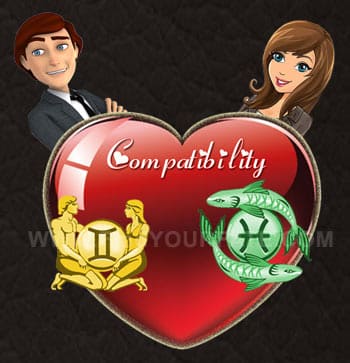 There would be better compatibility in romance between this pair.

Romance would be more of flowers, lavish parties and a tinge of class exists in their romantic outings. But then passion is not something in the dictionary of the Gemini guy. This upsets the Pisces girl who years for much passion in relationships. But then lack of passion gives both their individual freedom to pursue their personal interests.

The Gemini man and the Pisces woman make great friends in life. They are attracted to the curiosity of life and love travelling together. They are social sun signs and hence get along easily with common friends. They love to talk a lot about themselves and the world around. Both are tolerant of the other to pursue this comradeship for long.

There would not be much compatibility with this duo when it comes to marriage. But then they get along well each other. This is because they are social and entertain many mutual friends and relatives. The negative is that both are never ever ready to take on the responsibilities of a marriage. Gemini hates details while Pisces loves to postpone things to the end. Also both are known for their constant flirting and straying. This might bring in problems for the marriage.

When things turn sour with this pair, Gemini would be doing the talking while the Pisces would not mind litening to him. But then there would not be any harsh moments between the duo. The split would be on a friendly note, the only thing being that the Pisces lady should not postpone the end game as well.

• Gemini Love Match with other Signs