A Gemini man and a Gemini woman are very much compatible in life. But then they are a bunch of naughty fellows waiting to play pranks on others. As both are adept in communication any sort of misunderstanding would be worked out easily by talks and mediations. There would be much fun and variety in this combo. 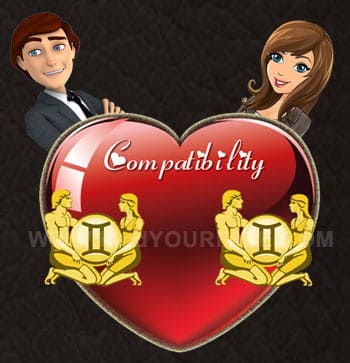 The Gemini guy and the Gemini girl are full or romance, passion and adventure when they are together.

There would be occasional ups and downs in their relationship but the passion would be held intact. Each one likes to get the attention of the other by his or her romantic moves. There would be no place for incompatibility or boredom here.

With communication as their forte this duo make good friends in life. But then there would be occasional frictions due to interference into each other's territory. It would be an eventless relationship to be precise. Too much of talks also spoils the broth!!

Though the duo are compatible in marriage, there would be occasional hiccups. Their restless nature and shallow feelings cause moments of incompatibility now and then. If mutual trust is compromised then the relationship would be in turmoil. Finances would be a bone of contention with this pair. If both are strong in their love for the other then there would be bliss in this combination.

This Gemini duo are compatibility when it comes to the act of sex. It would be a mercurial phenomenon for both of them being ruled by the planet Mercury!!. Both of them are great in foreplay and sensual communication in this act. Sex would be never boring as they find different ways of satisfying the other half.

When a Gemini guy and a Gemini girl in a relationship or marriage find out it is time for a split, it would be a hard time for both. When one is serious about splitting the other finds a rapprochement. They will be at loggerheads and only a third party would need to intervene so that the duo have an amicable settlement. Usually they end up in counselling centers.