There would be a greater level of compatibility between a Cancer woman and a Scorpio man.Both are very passionate and romantic signs and hence there would be no lack of the same. Both are loyal and faithful to each other. They protect the other and make them feel as part of one being. Both being watery signs, emotions just flow. Tolerance would keep the going easier for the duo. 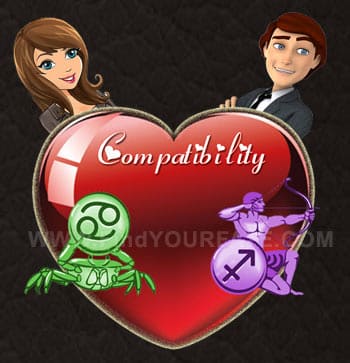 The compatibility for romance with this pair would be one the best among the zodiacs. There would be great bonding as the Cancer female shows much feminine tendency and the Scorpio guy the masculine side. Passions rise and fall like the tides but then intimacy is kept for long.

The Cancer woman and a Scorpio man do not make great friends in life. The reason being, the Scorpio guy would be too possessive of her and this inequality works against any sort of comradeship. Though both are known to share feelings and emotions, it would not be on a friendly level and instead on a different scale altogether, mostly on a sensuous note.

There would be a greater level of compatibility when it comes to marriage between a Cancer female and a Scorpio male. Both of them would be loyal and dependable and stand on a common family-bound pedestal. The Scorpio guy leads the relationship and the Cancer girl would be more than willing to follow him. There would be much comfort and warmth in this relationship.

Sex would be highly compatible with this pair. Both are loyal and are not found to stray from their relationship. They trust and are honest to each other and these feelings would be passed on to their sexual encounters. A sort of un-conditionality would be seen here.

The relationship between a Cancer woman and a Scorpio man would last long enough. But then if things turn sour then the end would be highly painful for the duo. There would be much anguish, worries and anxieties on both the sides.