A Cancer woman and a Leo man make a compatible marriage or relationship. The Leo man gives all that the Cancer woman wants in life, material benefits, security in love, lots of love, warmth, etc. She in turn would give him lots of affection, good food and attention. Hence there would be much commitment in the relationship.The masculinity of the Leo guy and the feminine nature of the Cancer woman are best brought out in this relationship.
Both playing their gender roles properly. Both would be patient with each other, caring and devoted to family ties, that home would be heaven for this pair. 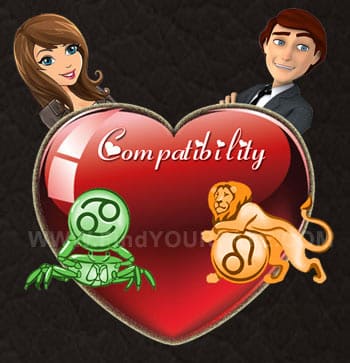 There would be greater level of romance and passion between a Cancer woman and a Leo man.

Both are comfortable with romanticizing around. But then they stick onto old world customs and traditions as well. The Leo guy being a sign of eroticism would make sure that there is no lack of passion here in the relationship.

This duo make great friends in life. Together they bring out the best in the other one. They defend themselves together from outside influences. They stick on together through thick and thin that they make great friends for life. Mutual appreciation and security would be the key here.

The Cancer woman and the Leo man make an ideal compatible couple in marriage. Together they make the house a home. Children and elder members in the family would be attended to for every beck and call. There would be a sense of joy and happiness. They make a committed and loyal couple. This is a devoted relationship that is devoid of any incompatible issues.

There would be a greater level of compatibility in sex with this pair. This is because the Cancer girl and the Leo guy are committed , loyal and trustworthy. They do not stray. Sex acts as a binding force for them. Though they stick to conventional ideas in having sex there would be no abstinence for long. Both take sex as a way of expressing their love, affection and warmth.

This is a relationship that is unlikely to end. But then if fate has it that way then it would be the Leo guy who should take the initiative. He makes sure that the Cancer girl would remain as secure as ever in terms of physical and mental sense and then bids goodbye.