The Cancer man and a Capricorn woman exhibit great compatibility in life but usually it is found to be short-lived. They would find it difficult to handle the hiccups they encounter in life occasionally. The initial attraction shown slowly loses its steam. But then better understanding, commitment and tolerance would help a lot to the relationship remaining intact.
There would be role-reversals found in this combination, with the Cancer guy nurturing the home while the Cap woman might go out for earning. But then mutual respect would take them far in life together. 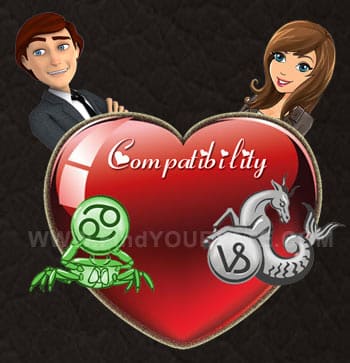 The Cancer man and his Capricorn counterpart share much compatibility in love and romance. He would make his partner comfortable by attending to her every beck and call.

The Cancer guy supplies a constant source of emotions needed for the relationship to keep going. He would be a shoulder to lie on for the work-weary Cap girl.

Compatibility for friendship between a Cancer guy and Capricorn girl would be great. They rely much on each other for comradeship to exist. The Cancer guy just nurtures the relationship by his protective nature. Both are interested in the well-being of the other in the relationship that a good level of friendship always exists between this duo.

There would be better compatibility between a Cancer man and a Capricorn woman. The role reversals make sure that the marriage remains intact for ages. He makes sure that his girl is taken care of, fended as much as possible. He takes care of the family chores. The Capricorn girl who normally does not need anyone in life takes the Cancer guy as a necessary evil. They just stick together for life.

The relationship between a Cancer man and a Capricorn woman would last long. But then financial issues might mar the relationship at times. Also role reversals might play spoilsport here. If both understand the hard work put in by the other into the relationship then it would stand the test of time.